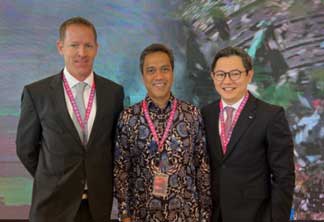 The agreement intends to explore the feasibility of developing a green hydrogen facility, with a production capacity of at least 40,000 tonnes/year, powered by 250-400 megawatts of geothermal energy in the initial phase. The hydrogen production facility could have the potential to scale up to 80,000-160,000 tonnes/year, depending on the availability of geothermal energy as well as market demands.

It also aims to draw on the complementary strengths of Pertamina, the largest energy company in Indonesia; Keppel Infrastructure, a leading Singapore-based energy infrastructure solutions provider with a strong track record of developing and operating large scale energy and environmental infrastructure projects; and Chevron, a multinational energy corporation.

According to an International Energy Agency report, Indonesia, the world’s fourth most populous country, has a viable path to reaching its target of net zero emissions by 2060.

Dannif Danusaputro, CEO of Pertamina NRE, said, “The development of green hydrogen and green ammonia holds a significant role in Indonesia’s Net Zero Emissions roadmap. And with its potential, we believe that Indonesia will also play a key role in green hydrogen production in Asia. We are very excited with this strategic collaboration as we know that Keppel and Chevron are reputable companies and have the same vision in energy transition as we do.”

Cindy Lim, CEO of Keppel Infrastructure, said, “Indonesia is a country with vast resources and enormous potential for renewable and low carbon energy. We are happy to partner with industry leaders, Pertamina and Chevron, to explore the first of its kind use of geothermal and other renewable energy to develop green hydrogen and green ammonia projects and support Indonesia’s energy transition efforts, as well as catalyse investments in green energy supply chain in the regions. In line with Keppel’s Vision 2030, which places sustainability at the core of its strategy, this collaboration will broaden Keppel Infrastructure’s geographical footprints to create and capture more value arising from the global commitment to net zero and its energy transition.”

Austin Knight, vice president of Hydrogen, Chevron New Energies, said, “We have a long history of working in Indonesia and with Pertamina, and a growing relationship with Keppel Infrastructure. We look forward to leveraging our collective strengths to study and evaluate lower carbon opportunities for the region. Chevron’s strength has always been solving big, complex energy challenges, and creating a lower carbon future is the opportunity that motivates us. As part of this effort, we must work together to identify new, innovative ways of producing and delivering ever-cleaner energy to a growing world.”

Keppel Corporation Limited, the parent company of Keppel Infrastructure, does not expect the abovementioned development to have any material impact on Keppel Corporation’s earnings per share and net tangible asset per share for the current financial year.