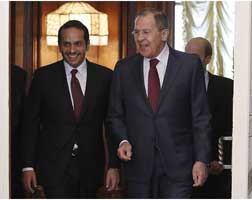 Qatar and Russia confirmed their mutual commitment to strengthen their coordination in energy, in oil production, and in the gas-exporting countries forum. The two countries also vowed to improve trade and economic ties, Russia’s Foreign Minister Sergey Lavrov said after meeting with his Qatari counterpart in Doha.

Lavrov noted that there is a growing interest in mutual increase of investments between the Russian Direct Investment Fund and the Qatar Investment Agency.

Early this year, commodity giant Glencore and Qatar’s sovereign wealth fund completed the acquisition of 19.5% in Russia’s oil behemoth Rosneft in a deal worth the equivalent of around US$11.3 billion at the time.

Both Russia and Qatar are one of the world’s biggest gas producers and exporters, and both are party to the ongoing crude oil production cut deal, with Russia leading the non-OPEC nations in the agreement and Qatar being part of the Organization of the Petroleum Exporting Countries (OPEC).

But for nearly three months, Qatar has been isolated by its Persian Gulf neighbors, as Saudi Arabia, Bahrain, Egypt, and the United Arab Emirates (UAE) cut diplomatic ties with the tiny gas-rich country in early June, accusing it of sponsoring terrorism groups—a charge that Doha denies.

During his visit to Qatar, Lavrov said that he discussed the situation with his Qatari colleagues and that Russia continues to believe that solutions should be sought via dialogue and compromise. Russia reiterated its support to Kuwait’s mediation in the dispute, Lavrov said. Moscow believes that the spat should be settled within the Gulf Cooperation Council (GCC), the Russian minister noted.

Before visiting Qatar, the Russian foreign minister was in also Kuwait and the UAE earlier this week to discuss the conflicts in the Middle East—including the Qatar spat—and economic and trade ties between Russia and Kuwait and the UAE, respectively.