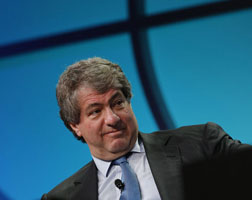 SAN FRANCISCO – Apollo Global Management LLC’s head of energy investing said the worst is still to come for oil as OPEC may decide against cutting production for years.

“They have every economic incentive to let this play out,” Greg Beard said of the Organization of Petroleum Exporting Countries on Wednesday at the SuperInvestor US conference in San Francisco. “I argue to being bearish longer. The worst, the problems, are yet to come.”

Oil, which peaked last year in June, began tumbling as global energy demand weakened, especially in China. OPEC, seeking to defend market share amid a U.S. shale expansion, decided in November to keep its production unchanged, setting off a further plunge in price. The group is responsible for 40 % of the world’s supply.

Apollo, along with private equity peers that own oil producers, has taken a hit. The industry has seen more than US$15 billion in portfolio value erased from 27 public energy producers since June, according to data compiled by Bloomberg. Run by billionaire Leon Black, New York-based Apollo last week reported a 79 % drop in fourth-quarter profit — even after earning billions of dollars in profit on its sale of Athlon Energy Inc.

OPEC could keep oil prices low and fund its social programs for four years before even needing to access the debt markets, Beard said.

“They could go for years,” said Beard. “A few months of low pricing isn’t going to do it. We haven’t seen capitulation yet.”

Apollo, which is raising money for both energy buyouts and credit opportunities, isn’t rushing to put money to work, Beard said in an interview on the side lines of the conference. Credit investors can achieve 15 % in annual returns for investments made now as long as they accurately value the cash flows of target companies, according to Beard.

Apollo is making such investments, he said, though it’s waiting for energy producers to come under more pressure before using buyouts to target returns above 20 %.

“We have our target names, we have our buy levels,” Beard said. “We’re ready to go.”

Blackstone Group LP, the biggest private equity manager, on Tuesday said its credit unit and Magnetar Capital will lend US$250 million to Jones Energy Inc., which acquires and develops oil and gas properties in the Anadarko and Arkoma basins of Texas and Oklahoma. Blackstone President Tony James last month said the firm is “scrambling” to invest more than US$10 billion in energy companies to profit from discounts that he said could provide “equity-like returns.”