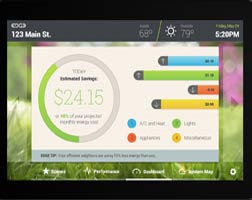 A study shows that apps that give real-time energy use are the most effective tools to save energy. Real-time feedback is more effective than reviewing your energy bill and comparing with your neighbors.

The research is lead by Beth Karlin, PhD, of the University of California, Irvine. The paper on it appears in the journal Psychological Bulletin, which is published by the American Psychological Association.

Researchers analyzed 42 studies published between 1976 and 2010 that involved a total of 256,536 participants. This meta-analysis reinforced previous findings that feedback is effective in producing energy savings but results varied significantly from study to study so researchers broke down each study’s moderating factors (i.e., feedback methods, length of feedback, etc.) to help figure out which types of feedback are most effective.

Results showed that the studies with the least engaging feedback, like summarizing energy usage on a utility bill, were the least effective, while something more engaging, like home computer software that details energy use in real time, was the most effective in conserving energy use, according to the article.

Having consumers set goals for energy use and giving them feedback on their progress is effective, Karlin said. For example, electric companies that let households set a monthly electricity goal in dollars, kilowatt-hours or carbon dioxide emissions and then allow them to see how well they’re meeting their goals over time are best at getting consumers to lower their electricity use.

The analysis also found that presenting feedback in terms of energy used or potential money saved may not be enough to get people to conserve. A small number of studies did suggest that a combination of feedback with external incentives, like cost savings, could be effective, but there was not enough research to help the researchers understand its effectiveness. “This is a highly promising finding that should be explored further through additional study,” Karlin said.

Interestingly, giving feedback on how someone’s energy use compares to his or her neighbors, also known as the social comparison method, is not as effective when compared to some other methods, such as allowing consumers to set personal energy use goals.

This is particularly relevant in California where some water companies are using the social comparison method in an effort to drive down water use, according to Karlin.