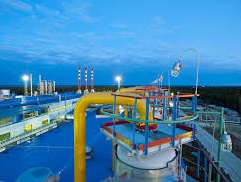 Russia’s top natural gas producer Gazprom has cut its 2015 production plan to 450 billion cubic metres (bcm) after warmer weather hit demand; it is the second downward revision in a week, according to company insiders.

The forecast is still higher than the 444.4 bcm of gas the company produced last year, an all-time low. In previous week, Gazprom had revised its production plan for 2015 to 471 bcm. The firm says it expects a total of 450 billion cc this year.

Compettion from other domestic gas producers and slow demand from Europe weigh down on sGazprom, which accounts for 8% of Russian gross domestic product (GDP).

Meawnhile, Gazprom reached an agreement with Turkey to start gas supplies via the Turkish Stream pipeline in December 2016, and will commence laying pipes for the project in early June. The Russian firm is supplying up to 63 bcm of gas per year via Turkish Stream and to create a gas hub on the Turkish border with Greece, through which it wants to transit 47 bcm annually.