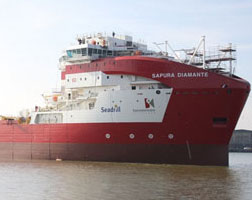 KUALA LUMPUR – SapuraKencana is leading in oil and gas stocks following the surge in the price of crude oil.

JF Apex Research said following the bullish sentiment in the US, it expects the KLCI to rise and test its immediate resistance of 1,845.

Reuters reported Asian stocks took cues from a global surge in equities and rose on Thursday, while the US dollar was on the defensive after weak US economic data.

The wire report also said US crude for May delivery had fallen 40 cents to US$55.99 a barrel by 0010 GMT. It jumped nearly 6% to a 2015 peak on Wednesday after government data showed crude oil inventories in the United States rose less than expected last week.

At Bursa Malaysia, Deleum gained 12 sen to RM1.87, SKPetro rose eight sen to RM2.68 while Bumi Armada edged up one sen to RM1.21. However, Petronas  Chemicals was down four sen to RM5.69.

Among the healthcare and pharmaceutical companies, Apex Healthcare added 13 sen to RM4.10 and Pharmaniaga eight sen to RM6.28.

IOI Corp fell four sen to RM4.52 and it  was the biggest loser among the plantations.

As for the telcos, Axiata shed three sen to RM7.01, DiGi and TM two sen each to RM6.22 and RM7.38 on news that mobile service providers have agreed to slash the price of basic broadband Internet package to only RM25 a month for 1GB mobile data plan.

Integrated poultry producer Farm Best lost two sen to 70 sen after the Securities Commission rejected its application for a series of corporate proposals, which include a reverse takeover by a China poultry player.