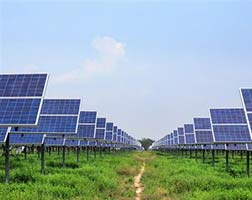 LAKE HALLIE — Solar energy continues to heat up across the Chippewa Valley — if buying the energy through Eau Claire Energy Cooperative’s solar farm is any indication.

Monica Obrycki, executive assistant for the cooperative, said she signed up 15 people for 20-year contracts for solar panels during meetings Thursday to kick off the solar farm, a project dubbed MemberSolar.

“There’s a lot of positive energy about this project,” said Obrycki, who was among a group of co-op employees signing people up for panels and fielding questions regarding their use.

Cooperative members have the option of buying energy produced by one to 30 panels over the next 20 years.

The co-op bought 2,816 solar panels that will be installed in a 5-acre field next to its offices along U.S. 12 between Eau Claire and Fall Creek. It will be the largest solar farm in the state.

Work on the project began Tuesday, but no panels have been installed. It is expected to begin operation on Oct. 1.

On Thursday the cooperative signed up people purchasing solar power at meetings at town halls in Lake Hallie, Bridge Creek and Washington.

The co-op is offering “subscription units” for $650 each to use the energy produced by a 350-watt panel over 20 years. Officials estimate the panels will each produce 426 kilowatt hours during a year, with an estimated energy savings at current rates of $49, or $900 per panel during 20 years when compared to current energy prices.

If history is any guide, energy costs tend to go up over time, Thompson said.

The panels lose efficiency over time, at a rate of about ½ % per year, a factor taken into account in energy use calculations, he said, noting the cooperative is part of the Dairyland Power Cooperative network and most of its electricity is coal-generated.

Under Wisconsin law, utilities need to produce 10 % of their electricity from renewable sources by 2015. Dairyland is already at 12 %, Thompson said.

Most of the 10,600 members of the cooperative are in Eau Claire County, although the co-op also serves parts of adjacent counties, he said.

Price drops for solar panels in recent years, combined with the cooperative’s ability to get a good deal by buying in large quantities, has made solar energy price competitive with conventional energy, Thompson said.

Bob Gadwill of Altoona, a member of the co-op’s board of directors, said the board strongly supports the member solar project.

“Now if we can just get the word out,” he said. – Leader Telegram