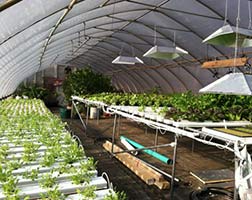 A local farmer is beginning to make a profit off an alternative growing style after five years of research, planning and construction.

John Carroll, of Lawndale, worked for a greenhouse delivering flowers for 15 years, but lost his job when the business was forced to close. Shortly after, he began to grow Shitake mushrooms and sell them at local farmers markets and restaurants.

After watching a report about hydroponic farming on TV and getting requests for a wider range of produce from the local restaurants and markets, Carroll decided to do more research. Hydroponics, the style more widely known as hydro-farming, is a unique method where plants are grown in a greenhouse in water rather than soil.

In 2010, Carroll and his father, Jimmy, attended a three-day hydroponics seminar hosted by Crop Kings, where they got to experience the day-to-day operations of hydro-farming. Jimmy said he was skeptical of the style at first, but after seeing produce and the self-sufficiency of the greenhouse at the seminar, he agreed to help his son start a hydro-farming business. Jimmy provided the land for the greenhouse, and John paid for the construction and other start-up costs.

Five years later, Big John’s Hydro-farm is now a 3,584-square-foot, fully functioning hydro-farm that has just produced its first half-season of crops. John Carroll has been able to sell his produce to local farmers markets, restaurants and grocery stores.

The greenhouse is bedded with five and a half inches of concrete to keep the floors between 74 and 90 degrees to ensure cultivation. Its north-to-south landscape allows the sun to hit each angle of the greenhouse throughout the year.

“Things are a lot different in here than they are in a regular garden,” Carroll said.

Seeds are planted in Rockwell cubes and paired with a volcanic crushed rock that is superheated. This allows for the plants to maintain a two inch reservoir of water.

Carroll has been picking tomatoes from the first partial season since March 25 and said the greenhouse has produced 12,000 pounds of tomatoes.

“Everything will come out in the next three weeks, and then we will re-plant and pick again the first week in October until June,” he said.

Carroll expects a full season will produce between 30,000 and 35,000 pounds of tomatoes. He thought that tomatoes would be profitable because not every farmer grows tomatoes, and they are always needed in schools and restaurants.

The goal for Big John’s Hydro-farm LLC is to become certified with a Good Agricultural Practices certificate, which will allow the company to distribute produce to local schools and grocery stores.

“We would love to provide schools with fresh local produce instead of them buying products shipped from other countries.” Carroll plans on experimenting with celery, onions and jalapenos in the future. – gastongazette.com