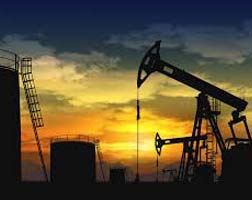 North Dakota’s oil production reached beyond the 1.2 million barrels per day (bpd) mark for only the second time in history in May, according to the latest data available from the state’s Department of Mineral Resources (DMR).

The state hit an all-time high of 1.22 million bpd in December 2014 but operators have struggled to reach that level again due to market conditions. DMR Director Lynn Helms told reporters at his monthly press conference today that oil prices and rig counts continue to dip, but equipment and fracturing efficiencies should help operators sustain between 1.1 million to 1.2 million bpd for the next two years.

“Industry is going to find it pretty easy to stick at that 1.2 million barrels per day mark,” Helms said. “I think people are hoping prices increase and we can go back into a growth mode, but we’re capable of sustaining production for a couple years.”

Rig count dropped to 83 in May and has since dropped another 10 as of today, but Helms explained that operators are experiencing a doubling of efficiency with rigs so drilling that used to take six weeks is now done in only two, allowing a single rig to drill 24 wells in a year.

“So you can’t really compare 73 to 190 rigs even a year ago because those remaining rigs are very, very good at what they do,” he added.

Production from the core of the Bakken is also improving. An initial daily production (IP) rate of under 500 barrels was not uncommon a year ago, but it is today. Helms noted that three recently completed wells even produced IPs over 3,000 bpd.

“So not only are the 73 rigs able to drill twice as many wells, but the wells are 25 % better than a year ago,” he said.

The state has 925 wells still waiting to be completed and put on production, but deadlines to do so are forcing the industry to forge ahead. In June, about 125 wells were due to be completed to stay in compliance of state rules, and operators completed approximately 100 of them. The state issued notices to the operators of the remaining wells telling them they have six months to either complete the well, file for an extension, or plug the well. Helms said only 20 wells are due for completions in July and 10 in August, but there should be another surge in December and January. Because of the large number of completions required in June, Helms expects production is likely to be a record-breaker for the month, but those totals will not be available until August.

Related: N.D. oil output up slightly even as fewer rigs are active in the Bakken.

Though operators prefer waiting for oil prices to rebound to at least $65 a barrel before completing a well, fracking costs have declined and helped slash about $1 million off of well costs. Helms said continued cost reductions could lower that $65 target to $60 a barrel. Fracking crews have reduced manpower and capital investments, but a change in proppant has saved substantial dollars as well. Operators are using more sand and less ceramic proppant because they’ve found the basin responds better to high volumes of sand within smaller fractures.

The fight against flaring stayed steady in May with 82 % natural gas capture statewide. Operators on the Fort Berthold Indian Reservation also maintained an 88 % capture rate from April. However, the state’s natural gas volumes were on the rise by 23.5 million cubic feet per day (cfpd) over the prior month.

“What we’re really after is a volume decrease,” Helms said.

While Hess’ Tioga gas plant was able to reach 93 % of capacity in May, the expansion of gas gathering from south of Lake Sakakawea remains delayed. Hess has a pipeline project waiting for approval from the Bureau of Land Management to cross the lake, and the operator told Helms that if a decision is not made by the federal agency within the next two weeks, the project will lose the construction season and need to be postponed until next year.

“We’re down to absolute crunch time on that,” Helms said.

The project originally would have helped capture nearly 50 million cfpd of gas stranded in the area, but Hess has found other alternatives to cut that total in half. However, Helms said 25 million cfpd is still “very significant.” – Bakken