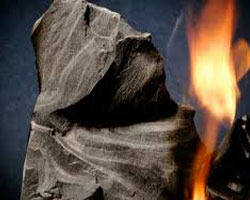 Shale fields that powered the U.S. energy renaissance will suffer the biggest drop in output since the boom began after companies pulled more than half their drilling rigs.

Production from the prolific tight-rock formations such as the Eagle Ford in southern Texas will decline 91,000 barrels a day in August to 5.36 million, the Energy Information Administration said Monday. It’s the fourth month in a row production is expected to slide, after more than tripling from 2007. 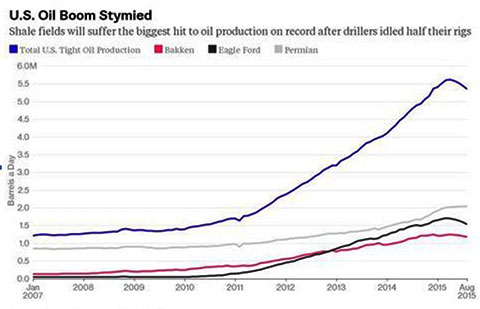 Output is slipping after producers from ConocoPhillips to EOG Resources Inc. reduced the number of drilling rigs in order to cut costs following a 50 % drop in the price of oil. About 645 rigs were drilling for oil last week, down from 1,609 in October, according to oil-field service company Baker Hughes Inc.

“The market is largely anticipating oil production to keep declining this year and snap back to a certain extent in 2016,” Andrew Cosgrove, a Princeton-based energy analyst for Bloomberg Intelligence, said by phone Monday. Second-half declines this year will be muted, due to high-grading and efficiency gains, he said.

“We need to see oil prices above $60 and more toward $65 to spur a recovery in the rig count,” Cosgrove said. “The longer it stays below $60, the harder it’s going to be for U.S. production to ramp back up.”

The EIA’s production forecasts cover the yield from major plays that together accounted for 90 % of domestic output growth from 2011 to 2012.

Output from the Eagle Ford in Texas, the second-largest oil field in the U.S., is expected to fall 55,000 barrels a day in August to 1.54 million, about 10 % below peak levels in March. Production in the Bakken region of North Dakota will decline 22,000 to 1.18 million, the EIA said.

Yield from the Permian Basin in West Texas and New Mexico, the largest U.S. oil field, will continue to rise, by 5,000 barrels a day to 2.05 million.

The EIA’s oil-production estimates are based on the number of rigs drilling in each play and estimates on how productive they are.

As the rig count has dropped, companies have targeted richer sections of shale and made adjustments like using more sand in each hydraulic fracturing job to make each rig more productive. That’s why production has not fallen off nearly as much as the cratering rig count, said Carl Larry, head of oil and gas for Frost & Sullivan LP.

“Technology is beating rig counts to the punch,” Larry said by phone Monday from Houston. “People are looking for cheaper, more efficient ways to enhance their oil recovery, and they’re finding solutions faster than the production can decline.” – Bloomberg