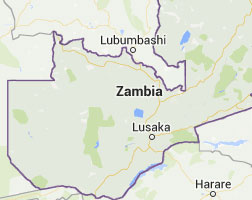 Zambia’s cabinet authorised state-run power company Zesco to import of 100 megawatts (MW) of electricity to ease a power deficit of 560 MW, Kambwili said in a statement.

“Cabinet has explored the option of power-renting from ships docked at sea,” he said.

Zambia, Africa’s No.2 copper producer, plans to cut power supplies to mines by up to 30 % as early as this week after water levels at its hydro-electric projects dropped due to drought.

Zesco is rationing electricity until the rainy season starts around October, Kambwili said.

The company will lose out on $287 million this year due to lost income from customers and importation costs.

The cabinet has approved the construction of a 340 MW thermal power plant, Kambwili said, without giving any details.

Zesco is due to commission a 120 MW Itezhi-tezhi power station in August and a private firm the 150 MW Maamba coal-fired plant in November. A 150 MW hydro-electric power station is also planned.  – Reuters