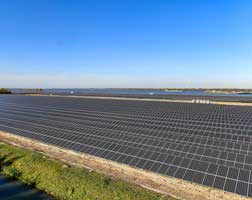 Oil company Shell recently opened its solar park at the Shell Moerdijk Chemical Plant in the Netherlands. With 76,000 panels, the solar park has a peak capacity of 27 megawatts, equivalent to the energy consumption of 9,000 Dutch households. The generated solar energy will be used to help power operations at Shell Moerdijk.

“Developing this solar power plant in Moerdijk fits within Shell’s ambition to play an active role in the Dutch energy transition,” says Marjan van Loon, President-Director Shell Nederland. “We are eager to limit emissions through energy efficiency improvements of our processes and investments in new energy activities. To accelerate energy transition, it is important that we align our activities to the ideas and initiatives in society. We know dialogue and collaboration is the key to success.”

Robin Mooldijk, Executive Vice-President for Manufacturing at Shell said: “At all Shell’s oil refineries and chemicals plants we are working to improve utilization, energy efficiency and carbon intensity. Alongside process improvements and equipment upgrades, we also need vision and imagination. This solar park, now operational and helping to power our Moerdijk chemicals plant, is part of that.”

Other examples of Shell’s work in the Netherlands on the energy transition include offshore wind in the North Sea, electric mobility at its retail sites and residual heat from Shell Pernis.

“Making the energy transition work is not a question of just one solution, but a combination of measures. More will follow in the coming years, one after the other,” said Marjan van Loon.