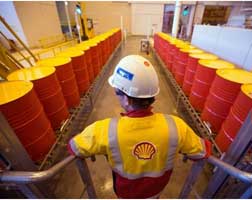 Anglo-Dutch multinational oil and gas company Royal Dutch Shell plc is increasing its North American shale oil and gas production earlier than its original plans to take full advantage of what has become one of its most profitable businesses, the head of Shell’s unconventional energy business said.

Shell is planning to make shale oil and gas in the US, Canada and Argentina a key engine of growth in the next decade, targeting output of around 500,000 barrels of oil equivalent per day (boepd), Greg Guidry, Executive Vice President for Shell’s Upstream Americas Unconventionals business, said in an interview.Shell had previously expected to hit that target after 2020.

A drive to cut the cost of producing oil and gas from US shale deposits has proven so effective that Shell has accelerated development plans, Guidry said on the sidelines of the CERAWeek industry conference in Houston.

It aims to boost output by 140,000 boepd over the next three years in the Permian basin in West Texas and the Duvernay region in Canada, said Guidry.

Shell produces 280,000 boepd in shale- a tenth of the company’s overall output of 2.8 million boepd in 2016. The firm is targeting an increase in global output to around 4 million boepd by 2020.

The world’s top oil and gas companies such as Shell, Exxon Mobil and Chevron have traditionally focused on developing complex projects such as offshore fields and liquefied natural gas plants that are expensive and take years to complete.

The sharp drop in oil prices since 2014 – a barrel is currently worth around US$56 – has pushed boards to increasingly look at shale, which is cheaper and faster to develop.

Shell’s shale output is profitable with oil prices at US$40 a barrel, with the most productive wells at an even lower breakeven, Guidry said.

Exxon and Chevron are betting heavily on shale output in the coming years. Shell’s short-term growth will mostly come from deepwater production in Brazil as well as LNG projects.

Further expansion in shale beyond the next three years is a possibility, Guidry said.

Shell is also developing shale capacity in the VacaMuerta region in Argentina, where it last month reached a deal with state-run company YPF to invest US$300 million.

The company will decide in around 18 months on whether to go ahead with commercial scale development of the unconventional formation in Patagonia, where it holds around 250,000 acres, Guidry said.