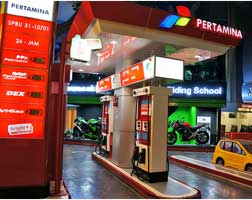 Indonesia’s state-owned oil and gas company Pertamina is planning to build 108 mini gas stations all over the country from this year until 2020 in a bid to lower distribution costs under the newly launched one-price fuel policy.

The Indonesian government announced the new policy in late October 2016 in the hopes of seeing fuel sold at the same price across the archipelago, closing the disparity previously seen between accessible regions and less accessible regions like Kalimantan and Papua.

Pertamina spokesperson Wianda Pusponegoro said that 22 mini gas stations with a total capacity of 5,000 liters of fuel,out of the 108, will be built this year. The firm earlier said that an investment of Rp54 billion (US$4.04 million) will be required in the construction of these stations, along with premium, oil and diesel fuel agents (APMS), in the challenging terrains of Maluku and Papua.

According to the plan, the firm will continue to build 45 stations in 2018, 29 stations in 2019 and another 12 stations in 2020, which will be located in the more remote areas without basic land and sea infrastructure.

Pertamina started to operate a dedicated Air Tractor aircraft that can carry 4,000 liters of fuel to Papua as it sought cost efficiency in late September.

In addition to building mini gas stations, Pertamina would also develop sub-agents in regions where investment was economically unfeasible through collaborations with the Downstream Oil and Gas Regulatory Agency (BPH Migas) and regional administrations.

At present, Pertamina runs about 5,700 gas stations and APMS in almost all regencies across the country, except in Nias regency, North Sumatra and Thousand Islands regency, Jakarta.

Four newly built fuel distributor agents in Nias and Thousand Islands may only start operation in the second quarter of 2017.

The one-price fuel policy, slated to come into force nationwide this year, will force Pertamina to allocate Rp800 billion in subsidies each year.

According to the company’s calculations, the construction of one APMS in a remote region with a capacity of 30 drums of fuel alone may require an investment of about Rp1 billion.

Nevertheless, Pertamina marketing and trading director Ahmad Bambang previously said that the company needed to bear the costs to establish more APMS by treating them similar to official gas stations.

“The problem is that we need the government’s support to increase the profit margin of such stations so that investors may get attracted to invest in APMS,” Ahmad said.

The profit margin gain from sales of Premium gasoline in gas stations is now only Rp270 per liter.Pertamina is in talks with the Energy and Mineral Resources Ministry’s Directorate General of Oil and Gas to raise the margin.