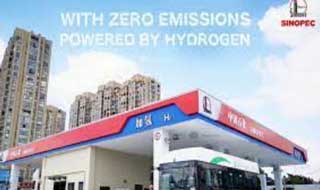 Located in Ordos, the green hydrogen plant is designed to have annual production capacity of 20,000 tonnes, with a total investment of US$405 million.

The green hydrogen produced from the plant will be supplied to a coal chemical project run by Zhong Tian He Chuang Corp, a joint venture set up by China Coal Energy Co, Sinopec, Shenergy and Inner Mongolia Manshi Group.

Read also: Investment in green hydrogen production to exceed US$1 bn by 2023

As China’s largest hydrogen producer, Sinopec has also said it will focus on fossil fuel-based hydrogen output over the next five years and set up 1,000 hydrogen filling stations across the country, as part of its goal to be carbon neutral by 2050

Sinopec currently owns a hydrogen production capacity of 3.5 million tonnes/year, mainly grey hydrogen as a byproduct from its refineries, accounting for about 14% of total hydrogen output in China.