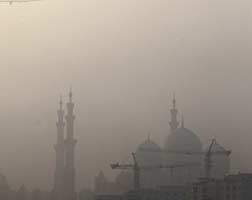 Abu Dhabi National Energy, also known as Taqa, has reduced its jobs by 22% amid a shrink of oil prices.

It plans to cut spending 2.5 billion dirhams (US$681 million) this year after reducing capital expenditures by 1.05 billion dirhams in the first half, according to an e-mailed statement from the company on Thursday. Headcount at the Abu Dhabi headquarters is down 32 % since July last year. Oil producers are cutting costs after Brent crude slumped 48 % last year and is down another 13 % this year. Taqa’s oil and gas production averaged 150,000 barrels of oil equivalent a day in the first six months, down 5 % from a year earlier as revenue from the business slumped 48 %. “While the current commodity price environment has impacted the whole industry, our results show that we are delivering on our accelerated cost transformation program,” Edward LaFehr, Taqa chief operating officer, said in the statement. Taqa reported a second quarter loss of 421 million dirhams compared with income of 239 million dirhams a year earlier. Total revenue dropped 28 % to 4.7 billion dirhams. The shares fell 2.9 % at 10:49 a.m. in Abu Dhabi trading. The company on Wednesday refinanced a US$3.1 billion 5-year credit facility, with an opening margin of 50 basis points over Libor, it said. Taqa has net debt of 71.9 billion dirhams, or 84 % of net capital. Electricity Generation Taqa’s revenue from electricity and water dropped 3.6 % to 2.3 billion dirhams for the second quarter. Taqa helps generate most of the electricity sold in the United Arab Emirates, of which Abu Dhabi is the biggest sheikhdom. Brent crude, the global oil benchmark, averaged US$63.37 a barrel in the second quarter, down 42 % from a year earlier as growing production from North America to Saudi Arabia contributed to a glut. Taqa started full commercial operations at its gas storage Bergermeer project in the Netherlands in April, providing 4.1 billion cubic meters of gas storage capacity, enough to supply 2.5 million Dutch households for a year. It’s now in the process of expanding its Takoradi 2 power plant in Ghana from 220 to 330 megawatts and commissioning a 100-megawatt Sorang hydro plant in northern India and a 30 million gallon per day water desalination facility in Fujairah, UAE.