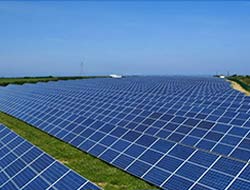 Subsidies for many new solar farms are to end under plans being published by the government.

The Department of Energy and Climate Change (DECC) is consulting on plans that would see subsidies for some new solar farms close by 2016.

The government says the move is necessary to protect consumers.

The solar industry said subsidies were one of the cheapest ways that the government could meet its climate change targets.

Under the government’s plans, so called “small scale” solar farms will no longer qualify for support under a key subsidy mechanism – the renewables obligation – from April next year.

New projects that receive the subsidy may also see the level cut.

Energy Secretary Amber Rudd said: “Our support has driven down the cost of renewable energy significantly.

“As costs continue to fall it becomes easier for parts of the renewables industry to survive without subsidies.”

She told the BBC’s Today programme: “We can’t have a situation where industry has a blank cheque, and that cheque is paid for by people’s bills.

“We can’t have a system, which we’ve had up to now, where there is basically unlimited [subsidy] headroom for new renewables, including solar.”

She conceded that subsidies to the nuclear industry, such as those planned for Hinkley Point, would exceed those going to solar, but she said that nuclear provided “a different type of electricity”.

“In the winter, at the moment, solar doesn’t really deliver much electricity,” she said.

The government plans also include reducing subsidies for power stations which convert to biomass, and proposals to review feed-in-tariff schemes.

Small scale solar farms, which are regarded as the cornerstone of the industry, can be up to 25 acres in size and typically power around 1,500 homes.

Supporters argue that the growth of these projects has helped to drive down the cost of solar in recent years.

But the government says the amount of support for renewable energy – which is paid by households through their energy bills – is set to rise in the coming years above agreed levels.

Subsidies for large scale solar farms were cut in January.

The Solar Trade Association (STA) says the industry accounts for just 6% of funds paid out under the renewables obligation.

It insists that support for solar is one of the cheapest ways that the government can meet its climate change targets.

Jonathan Selwyn, a board member of the STA, told the BBC that the subsidy cut would “have a very large impact” on the industry.

“Let’s get this straight, in the RO [renewables obligation], which is the solar farm’s main support subsidy, it’s costing about three pounds per annum on people’s energy bills – it’s a tiny amount when you compare it with other types of energy, like nuclear for example.”

He said government support had been “absolutely instrumental in the industry’s success” over the past five years, and that the industry was “tantalisingly close” to being able to operate without any subsidy.

However, he said that investor confidence would inevitably suffer by the consultation.

Mr Selwyn called for “a level playing field” for solar in relation to nuclear energy and fracking, in terms of subsidies and planning regulations.

The Welsh government said it was concerned about uncertainty caused by the government’s plans.

A spokesperson said the plans have the “potential to put jobs and investment under threat by reducing subsidies to projects already in the pipeline”.

“Again, it reinforces our call to [the] UK government to devolve all energy powers to Wales to ensure that we maximise the economic potential of renewable energy power generation and benefit communities across Wales.”

Solar farms saw “strong growth” in Wales between 2011 and 2015, according to Welsh government figures.

In that period, 23 farms were made operational, and planning permission was granted for 66.

Scotland’s Energy Minister Fergus Ewing also highlighted the potential threat to jobs, and said the Scottish government had not been “properly consulted” about the plans.

He said: “There are over 3,000 jobs dependent on this form of renewable energy in Scotland.

“We are concerned because just at the time where the industry has said it’s getting to the point where it’s able to do without subsidy in the next few years, we’re faced with another reduction in support coupled with a lack of clarity on exactly what will be done.”