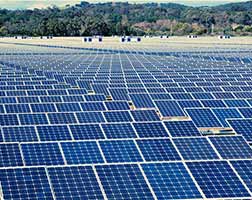 Subsidies for ‘small’ solar farms up to the size of 15 football pitches are to be cut, under Government plans to tackle the spiralling cost of green energy projects.

Ministers are expected to announce a consultation on proposed changes on Wednesday as they attempt to rein in a projected £1.5 billion overspend on subsidies for wind and solar farms.

The move comes after Amber Rudd, the energy secretary, disclosed that onshore wind farm developers have told her they may still be able to build projects without the lucrative consumer-funded subsidies, which the Conservatives are ending.

Appearing before MPs on the energy select committee on Tuesday, Ms Rudd confirmed to MPs that the annual bill for green subsidies, paid for by households on their energy bills, was forecast to hit £9.1 billion by 2020-21 – breaching the £7.6 billion spending cap set by the Treasury.

It is estimated that the overspend would add £20 to an annual household bill.

It is understood that the Government is now preparing to propose cuts to the financial support for smaller solar farms of up to 5 megawatts (MW) in capacity. A 5MW solar farm typically spans 25-30 acres.

Analysis of official figures by the Renewable Energy Foundation, a group critical of subsidies, suggests there are currently about 250 such projects either awaiting construction or seeking planning permission.

Ms Rudd’s department is currently reviewing all green energy subsidies and she told MPs that “value for money” would be top of her priorities.

She told MPs that since the announcement she was ending onshore wind farm subsidies, she had been approached by three onshore wind farm developers who were interested in potentially building farms even without subsidy.

The disclosure will fuel fears that consumers may have been getting a poor deal in paying high subsidies for such projects for years.

A spokesman for the Department of Energy and Climate Change said: “Reducing energy bills for hard working families and businesses is this government’s priority.

“We’ve already announced reforms to remove subsidies for onshore wind, and that work to make sure bill payers are getting the best possible deal is going to continue.” – Telegraph.co.uk