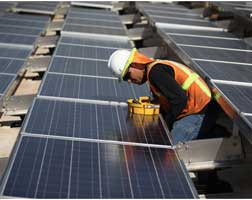 Representing a 24.5% growth from last year, there are now 260,077 workers in the US solar industry that spend half or more of their time on solar industry-related projects,according to a report recently released by Solar Foundation, a solar advocacy group based in the US.

Although the Solar Foundation admits that it is unlikely to see as much dramatic growth next year, total employment in the solar industry is still expected to increase by 10% to approximately 286,000 solar workers.

The numbers were collected from an annual census that the foundation takes, this year involving more than 500,000 phone calls and 60,000 e-mails to “known and potential energy establishments across the United States.”

The employment numbers from the Solar Foundation were recently included in a January 2017 US Department of Energy (DOE) report on energy-related jobs. The DOE noted in the report that it’s sometimes difficult to count solar industry jobs. According to the Bureau of Labor Statistics, for example, utilities only employed 2,800 workers on solar-specific generation, but that figure hides construction and maintenance jobs on projects that are “financed, owned, or directed by utilities.” The DOE wrote that it estimates only 20.6% of people employed in the solar industry work on utility-level projects—another 54.6% work in residential solar, and the remaining 24.7% work on commercially-focused solar installations.

The DOE also points out that the solar industry is interesting because despite all that employment in distributed solar (that is, non-utility solar), utilities still have a lot more solar energy capacity than homes and businesses—roughly 28,081,000 megawatt-hour (MWh) compared to distributed solar’s 16,974,000 MWh in 2016.

Utility-scale solar is important, but the Solar Foundation admitted that the sector is not likely to grow as quickly next year as it did this year. The foundation wrote that the utility-scale market grew by more than 10 gigawatts (GW) in 2016, double the 4.26 GW added in 2015.

But “this astronomical growth was triggered by the previous year’s anticipation of a 2016 phase-out of the 30% federal solar investment tax credit (ITC),” the Solar Foundation wrote. “In order to benefit from the ITC before it was presumed to expire at the end of 2016, projects needed to be completed by the end of the year.”

With the Trump Administration’s focus on fossil fuel, it’s unlikely that the country will see a new federal solar tax credit soon, so utility-scale development will likely drop in 2017.

In all, the Solar Foundation noted that 80% of the 51,000 solar-industry jobs added in 2016 were newly-created positions, and 20% were existing jobs that added a solar aspect to their responsibilities.