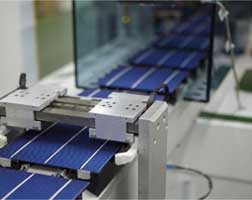 The 156×156sq mm solar cell reached a total-area efficiency of 24.13% as independently measured by the Japan Electrical Safety & Environment Technology Laboratories (JET). The IBC solar cell has a total measured area of 243.3sq cm and was measured without any aperture.

The champion cell presents the following characteristics: an open-circuit voltage (Voc) of 702.7mV, a short-circuit current density (Jsc) of 42.1 mA/sqcm and a fill factor (FF) of 81.47%.

“We are very delighted to announce the latest achievement from our research team at the SKL PVST. Over the last few years, our R&D team has managed to continuously improve the efficiency of our n-type IBC solar cells, pushing the limits and surpassing our previous records, and approaching very closely to the performance of our best small-area laboratory cell developed in collaboration with ANU three years ago,” said Dr. Pierre Verlinden, Vice-President and Chief Scientist of Trina Solar.

“We are very happy to announce today that our industrial large area IBC cell has reached almost the same level of performance as the small-area laboratory cell made three years ago with a photolithography process,” Dr. Verlinden said.

“IBC solar cells are one of the most efficient silicon solar cells available today and are particularly suitable for applications for which the requirement of a high power density is more important than LCOE (Levelized Cost of Electricity). Our IBC cell program has always focused on the development of large-area cells and low-cost industrial processes,” said Dr. Verlinden.