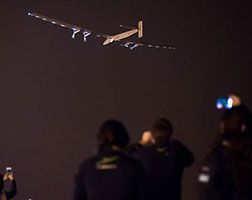 A solar-powered plane has set off on a six-day voyage over the Pacific – the most ambitious leg of a quest to circumnavigate the globe without a drop of fuel.

Swiss pilot Andre Borschberg took off in the revolutionary Solar Impulse 2 from China at 2.39am.

His 5,079-mile (8,173-km) journey from Nanjing to Hawaii is the longest and most dangerous of 12 flights powered only by the Sun.

“I cross my fingers and I hope to cross the Pacific. We have a good weather window, which means we have a stable corridor to reach Hawaii.

“For the Pacific, I need to be ready for the unknown. I’m not sure how Si2 will behave over so many days and nights.”

No ship or plane is trailing Solar Impulse 2 – and any failure would prompt a parachute descent with a life raft into the ocean.

Mr Borschberg and fellow Swiss pilot Bertrand Piccard are taking turns to fly the single-seater plane during a five-month journey aimed at promoting renewable energy use.

Their vision “to change our mindset regarding the enormous potential of clean technologies and renewable energies” was born 16 years ago.

The mission itself began in Abu Dhabi in March.

So far the Swiss plane, which has an autopilot function to allow whoever is in the cockpit to catch a short nap, has stopped in Oman, India, Burma and China.

After Hawaii, the plan is for Mr Piccard to pilot the aircraft to Phoenix in Arizona.