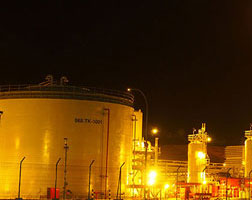 The recently completed Donggi Senoro liquefied natural gas (LNG) plant is expected to start commercial operations in June and begin to receive gas from nearby fields.

The plant, which is located in Central Sulawesi and will be the fourth LNG plant in Indonesia, has just finished its development, according to Pertamina president director Dwi Soetjipto.

“We are targeting that it will start the commissioning stage in June and start shipments in July 17,” Dwi said.

Pertamina, through its subsidiary PT Pertamina Hulu Energi, holds a 29 % stake in the project. Other shareholders are Sulawesi LNG Development Ltd., which is owned by the Mitsubishi Corporation and the Korea Gas Corporation with 59.9 %, and PT Medco LNG Indonesia with 11.1 %.

The development of the plant required around US$2.8 billion in investment and was the first LNG project developed under a downstream business plan, which separated gas production at the upstream and LNG processing at the downstream. The plan is seen as giving the most benefits to the country because the investment is not subject to the cost recovery of the state budget.

The gas supply from Senoro-Toili will support the initial operation of the LNG plant while Matindok is expected to start gas delivery in October, according to Dwi.

Under its development plans, Senoro-Toili will send a gas output of 250 million standard cubic feet per day (mmscfd) and Matindok will give 85 mmscfd. While delivering most of the output to the Donggi-Senoro LNG plant, an amount of the gas will also be delivered to an ammonia plant and several power plants.

The total gas to be delivered to the LNG plant will be 310 mmscfd, according to Lukman Mahfoedz, the president director of PT Medco Energi Internasional whose subsidiary holds a stake in the project.

The Donggi-Senoro plant will be equipped with an LNG storage tank with a capacity of 170,000 cubic meters of gas, an LNG liquefaction train with a capacity of 2 million tons per annum, a jetty and a gas turbine generator with an output of 3×22.6 megawatts.

Indonesia remains a major LNG exporter although the government is trying to boost the domestic absorption of the commodity. – The Jakarta Post