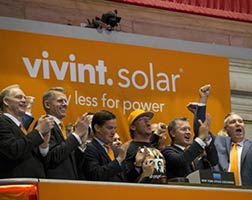 SunEdison, a renewable energy company, said on Monday that it and its publicly traded power plant unit, TerraForm Power, would acquire Vivint Solar for about US$2.2 billion in cash and securities.

The transaction is the latest for SunEdison and follows its agreement in November to buy First Wind, a leading developer and operator of wind farms, for US$2.4 billion.

Under the terms of the deal, Vivint Solar stockholders will receive US$16.50 a share in cash, shares and convertible debt, representing a 52 % premium to its closing price on Friday.

“SunEdison’s acquisition of Vivint Solar is a logical next step in the transformation of our platform,” Ahmad Chatila, the SunEdison chief executive officer and the TerraForm Power chairman, said in a news release.

“We expect the Vivint Solar transaction to create significant value for our stockholders through the accretion in our TerraForm Power ownership, the acceleration of our incentive distribution rights and an immediate expansion of our capacity and bandwidth to grow our residential business in the U.S. and globally.”

The transaction is subject to shareholder and regulatory approval and is expected to close in the fourth quarter.

313 Acquisition, an affiliate of the Blackstone Group and a Vivint Solar shareholder, has agreed to vote in favor of the merger, SundEdison said. 313 Acquisition owns about 77 % of Vivint Solar’s outstanding shares following its initial public offering last year.

As part of the transaction, SunEdison would sell Vivint’s rooftop solar power portfolio to a subsidiary of TerraForm Power for US$922 million in cash.

SunEdison intends to fund the cash portion of the merger through new debt and the sale of assets to TerraForm Power.