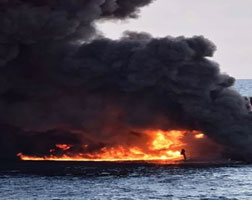 Sanchi, the Iranian tanker that sank after a collision in the East China Sea, had its paperwork in order, according maritime authorities in Panama, whose flag it was sailing under.

The large tanker sank recently and caused the worst oil ship disaster in years,after crashing into the freighter CF Crystal and drifting ablaze for days. The ship’s crew of 30 Iranians and two Bangladeshis are believed to have been killed.

Fernando Solorzano, head of Panama’s Merchant Marine, said there was no initial sign that the stricken ship was in breach of any security protocols. He added, though, that investigations could take months or even years to conclude.

“It had all the valid technical certificates on board and the financial guarantees required under international agreements,” Solorzano said in an interview late on Thursday.

An international team of experts from China, Iran, Hong Kong and the crew’s home countries would be analysing the voyage data recorder, a device that monitors the vessel’s progress, to determine the cause of the collision, he added.

Although the Sanchi was Iranian, it was registered under a Panamanian flag, a practice that has become commonplace due to the strategic importance of the Central American nation’s canal. The Panamanian registry has over 8,000 vessels on its books.

Solorzano said all vessels sailing under the flag had to comply with strict requirements. He conceded the event could adversely affect the image of the registry because it is known for having a low rate of incidents.