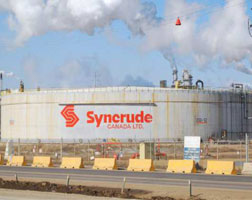 One of those might be a partnership with Calgary-based oilsands giant Suncor Energy Inc., which inherited 12 5 of Syncrude when it bought Petro-Canada in 2009, he speculated.

Share values of oil producers have been hit hard by the halving of crude prices since last summer but Canadian Oil Sands has been hit harder than most. Its market capitalization fell from $11.8 billion last spring to $5.5 billion, as its share price fell from a 52-week high of $24.68 to close at $11.37 on Monday.

He calculated that Imperial likely wouldn’t want to pay more than a price in the low teens for Canadian Oil Sands, so its stock would have to fall further to make an Imperial bid attractive. He also suggested the company wouldn’t want to take on excessive debt — that could mean an equity-based offer, help from its controlling shareholder, ExxonMobil Corp., or enrolling a current Syncrude partner such as Suncor.

“Imperial and Suncor teaming up on COS, what we don’t know is at what price they would want to bid if they want to bid,” said Dunn. “My point is that Syncrude and Suncor are across the road from each other, literally, so there should be a lot of cost synergy opportunities if those operations were integrated.”

Spokeswoman Siren Fisekci said Canadian Oil Sands won’t comment on speculation and it doesn’t need a saviour. “We are in good financial shape,” she said.

“As a matter of practice, Imperial does not comment on market speculation,” spokesman Pius Rolheiser wrote in an e-mail. “Similarly, we don’t discuss specific business strategies, including potential acquisitions, divestments or other potential future actions.”

Suncor spokesman Michael Lawrence said in an e-mail: “It’s not our practice to discuss speculation like that found in FirstEnergy’s report.”

The report looked at other potential Imperial targets in the oilsands, including MEG Energy Corp. ($9 billion enterprise value), Cenovus Energy Inc. ($23 billion) and the Surmont thermal oilsands project (likely price of $7.5 billion to $9 billion) owned by ConocoPhillips and Total.

It said all three potential deals are attractive to varying degrees and there would be cost-saving synergies but the price per share would be a deciding factor — along with the fact that Imperial will continue to be a well-respected, healthy energy company with a full portfolio of internal investment opportunities even if it decides against making any acquisitions.