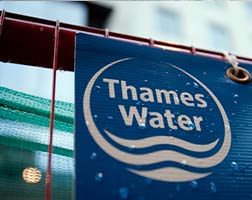 Thames Water has signed a £520m deal with a specialist power supplier to provide the utility firm with renewable electricity over five years.

The agreement with Haven Power, which is part of the Drax Group, carries an option for two further five-year renewals which could increase the overall value of the contract to more than £1.5bn over 15 years.

The company gets its power from Drax’s power plant in Selby, Yorkshire, which is converting from coal to biomass, which involves the burning of organic plant-based material, including straw, sunflower seed husks and peanut husks

Drax Group Chief Executive, Dorothy Thompson, said: “As the UK looks to decarbonise in an affordable and pragmatic way, it is pioneering companies like Thames that are leading the way.”

Drax is undergoing a major revamp to convert its power station – which supplies around 8% of the UK’s power – from coal to sustainable biomass.

Two out of six units have now been converted and plans are going ahead to convert a third unit to biomass later this year.

The estimated 12 million tonnes of carbon saved once three units are fully converted is equivalent to taking 10% of the UK’s vehicles off the roads. – Sky news