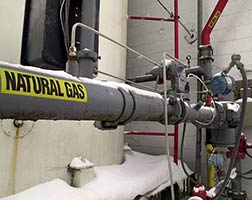 Pieridae Energy Canada has received approval from the United States Department of Energy to export American natural gas to countries with which the U.S. has free trade agreements.

While the proponent for a proposed US$8.3-billion liquefied natural gas export terminal in Guysborough County hailed the approval as a “significant milestone,” the important permit is yet to come.

Pieridae needs the department’s approval to export American natural gas to countries with which the U.S. has not signed a free trade agreement.

Pieridae inked a deal with German utility E.On Global Commodities SE in 2013 to ship it about five billion tonnes of liquefied natural gas annually. The agreement gave the Calgary company a guaranteed purchaser for half the export capacity of its proposed terminal in Goldboro and would be worth about US$35 billion over 20 years.

But the Pieridae plan involves using the Maritimes & Northeast pipeline to bring low-cost American shale gas to Goldboro for export. With production from Deep Panuke decreasing and the moratorium on hydraulic fracturing passed by the Liberal government, it is unlikely there will be much Nova Scotia supply for the export facility.

So the company is still waiting on a response on its request to be allowed to export to countries with which the U.S. doesn’t have a free trade agreement.

“We’re hopeful that it’s going to happen sometime in the next month or two,” said Mark Brown, director of project development for Pieridae.

“But we have no control over that agenda.”

Getting approved for export of American natural gas is not a simple rubber stamp.

According to the 1938 U.S. law called the Natural Gas Act, exports of natural gas to countries with which the United States doesn’t have a free trade deal must be judged to be in the national self-interest before being approved.

In April, Rob Franklin, president of ExxonMobil Gas and Power Marketing Co., spoke out publicly against what he considers foot dragging by the Department of Energy on the issue.

“If policy-makers don’t revisit and redress some significant legal and regulatory problems … then the U.S. could be left behind during one of the great historic developments in global energy and trade,” Franklin told the Johns Hopkins School of Advanced International Studies in Washington, D.C.

For his part, Brown said Pieridae’s applications met all the requirements demanded by the Department of Energy and his company continues with its front-end engineering work for Goldboro. He said they are on track to make a final investment decision on Goldboro during the second quarter of 2016. – The Chronicle Herald