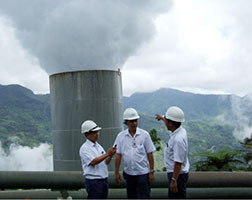 MANILA – The Philippines opened a tender process for 21 geothermal and hydro sites for exploration and development, hoping to expand its sources of indigenous energy and cut dependence on imported fuel, while offering opportunities to investors.

The Department of Energy (DOE) said it had received 39 bids to explore and develop a total of 16 sites – two for geothermal and 14 for hydro – from companies that included Energy Development Corp, the world’s largest geothermal company, its parent, First Gen Corp, and AP Renewables Inc, a unit of Aboitiz Power Corp. “We have eight bids for geothermal and 31 bids for hydro and we’re very happy with the turnout,” Mario Marasigan, director of the DOE’s Renewable Energy Bureau, told reporters after the submission of bids.

No bids were received for two other geothermal sites and three other hydro areas, but they will be opened for negotiated deals, he said.

Marasigan said the DOE still had to evaluate the bids to determine if they met legal, technical and financial requirements.

The winning bidders will be announced on Sept. 4, he said. – Reuters