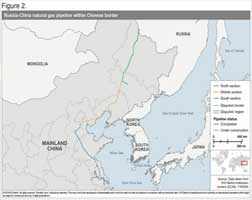 Five and a half years after signing the sales and purchase contract, first gas from the Power of Siberia pipeline project will be finally delivered to the Chinese gas market. Russia’s Gazprom and Chinese oil giant PetroChina signed a 30-year contract — which at plateau calls for supply of 38 billion cubic meters (Bcm) annually — in May 2014 and in a supplemental agreement subsequently to commence on 2 December 2019. Today’s inauguration ceremony at Blagoveshchensk-Heihe at the Russia-China border will mark the beginning of the era of Russian pipeline gas supply to China.

Gazprom started to work on the project very soon after the contract was signed. Of the 3,000 km of total pipeline length within Russian territory, the 2,200 km pipeline section connecting the Chayanda gas field to the Chinese border was essentially completed in the summer of 2019 (see Figure 1). Chayanda achieved first commercial gas production in August 2019, allowing the filling of the pipeline to begin. Pipeline fill to the border was completed in October. Development at the second field that will supply gas, Kovykta, has been under way as well, with drilling beginning in August 2019. Kovykta is slated to produce its first gas in 2023, allowing total production of raw gas at the two fields to reach 50 Bcm/y, which is more than sufficient to supply the contracted export volume. The European market will remain a top priority for Gazprom, but new exports to this rapidly growing gas market is a growth strategy for the company. Gazprom’s exports to Europe are expected to be around 200 Bcm a year (in Russian calorific standard), making the 38 Bcm annual contracted volumes to China a significant addition to Gazprom’s gas export portfolio. Furthermore, the two sides are still negotiating other supply options for up to 65-67 Bcm a year in combined delivered volumes. How successful the negotiations will partially depend on the actual progress of the Power of Siberia project in China.

On PetroChina’s side, pipeline construction within Chinese territory did not start until December 2017 but progressed on schedule to receiver first gas. The three regional markets designated for Power of Siberia gas include the northeastern region, BeijingTianjin-Hebei or Jing-Jin-Ji market, and the coastal market through Shanghai (see Figure 2). Construction on the northern section of the pipeline to the northeastern regional market was completed and started testing in April 2019, extending to Changling in Jilin province. The middle section of the pipeline, which will supply Russian gas to the JingJin-Ji region, began construction in the summer of 2019 and is slated to come online in late 2020. The southern section of the pipeline, which will go through Shandong and Jiangsu and end in Shanghai, will follow in 2021. The pace of ramp-up in delivery volumes will likely hinge on developments in China’s regional demand for Russian gas. That, in turn, depends on the target markets’ gas demand and Russian gas’ competitiveness in each regional gas supply mix.

From a demand perspective, the northeastern market is the closest to the border but has low affordability for high-priced gas. Russian gas will be very competitive in this region on a delivered-cost basis because of lower transportation costs within China. The two regional markets farther south (Jing-Jin-Ji and Shandong-Jiangsu-Shanghai) are well- established gas markets with growth potential, but already have a diverse supply mix that Russian gas needs to compete against.

The exact pricing formula for the Russian gas delivered to the Chinese border, like most gas supply agreements, is confidential. But IHS Markit understands that it is an oillinked contract, and, given the announced package value of $400 billion at the time of the agreement when Brent oil price was over $100/barrel, IHS Markit expects the Power of Siberia to have a similar fixed-price component, $1.25 per metric million British thermal unit (MMBtu), and a higher slope, around 9%, vis-a-vis oil prices than Central Asian gas delivered to the Chinese border. When sufficient data on landed prices at the border become available, regressions can be run to better estimate the general pricing relationship for the Power of Siberia gas.

IHS Markit’s current economic analysis indicates that the integrated Power of Siberia project is profitable, despite the high level of capital expenditure involved (about $29 billion for the pipeline and upstream development). IHS Markit estimates that the project break-even price (including applicable tax exemptions and export duty) is at the level of the estimated contract price in the Gazprom-PetroChina contract. Upstream tax exemptions are critical for project profitability.

Transmission tariffs are a significant part of bringing gas to Chinese consumers, both within Russia and within China. Within China, the Power of Siberia gas will need to travel thousands of kilometers from the border to reach the Jing-Jin-Ji region and all the way to Shanghai. Competing LNG imports, on the other hand, essentially arrive right at the coastal demand centers.

Given the short distances from the Russia-China border to consuming centers in the northeastern market and its limited gas supply options, Russian gas will be cheaper than most available supply sources there. But this region will not be able to absorb all of the contracted volumes, so Russian pipeline gas will have to go farther south to find sufficient market.

Transmission tariffs from the border to Beijing will be less than $2/MMBtu, making the Power of Siberia gas relatively competitive in the Jing-Jin-Ji. Here, Russian gas will likely be lower in delivered costs than most term LNG imports. That means Russian gas will put downward pressure on LNG imports. Nonetheless, IHS Markit still expects LNG imports to remain a crucial supply source in this region, especially for winter peak supply.

The farther south it goes, the higher the transmission cost Russian gas will incur – IHS Markit estimates $3.3/MMBtu from the border to Shanghai. That pushes Russian gas to the high end of the supply cost stack there, making it less competitive than most term LNG imports.

These assumptions on competitiveness have been built into our long-term gas supply mix outlook for China. The actual supply mix in each region will also depend on other factors, such as pipeline capacity availability, gas demand and supply options in the rest of the country, and suppliers’ strategies in these markets.