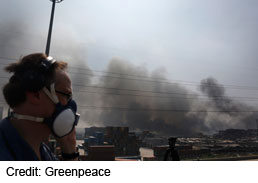 The August 12, 2015 fire at the Tianjin Port container warehouse, which triggered two major explosions in a hazardous material warehouse resulting in nearly 150 killed, almost 700 casualties and 70 others still missing, is the largest incident in China port history.

A Chinese government agency reported that materials stored in the warehouse included calcium carbide, sodium nitrate, potassium nitrate, ammonia nitrate, sodium cyanide, etc. Not only are these chemicals hazardous to human health, which requires that they be handled in a specific manner by trained personnel, but several of these chemicals are not intended to be stored in close proximity to one another. Sadly, this incident may have been prevented if existing Chinese safety standards and regulations for chemical storage and handling were followed and enforced.

China is the world’s largest chemical producing and consuming country, including hazardous chemicals. These chemicals are generally used as raw materials in feedstock to make downstream industrial chemicals, and consumer and agricultural products. China’s chemical industry has been growing rapidly for the past 15 years, and the industry’s significant growth rate is not forecasted to slow down anytime soon.

According to IHS Chemical, significant investments are being made in all major basic chemical value-chains at a pace that is significantly greater than any other country in the world, including a comparison to the US (recently experiencing a rebirth of chemical asset investment due to shale oil and gas). The research company says its analysis indicates from 2010 to 2020, China will invest in more than 100 million tonnes of basic chemical production capacity including: ethylene, propylene, methanol, paraxylene, benzene and chlorine. By comparison, the US will add about 30 million tonnes of the same basic chemicals during this period.

Since the Tianjin explosion happened in a container warehouse area, there were no bulk chemicals or plastics involved in the explosion or damaged (or at least too little to impact supply in a significant way). Bulk chemical tank farms are located far away from the warehouse where the explosion occurred, and therefore, there is not a direct impact reported to bulk chemical material handling operations. Chemicals production in the region was also not interrupted.

However, the chemical port loading/unloading in Tianjin was suspended and any chemical land shipments (by truck or rail) in the Tianjin region were also suspended immediately after the incident.

The government already has laws penalising non-compliance to safety standards. These laws are well-crafted and comparable to their US counterparts. The problem lies in implementation. Due to pressures to cut costs, chemical, mining, construction, and other companies cut corners and fall below standard.

According to IHS Chemical, to avoid another incident, the Chinese chemical industry should shift its focus from being a “purely a low-cost producer, to growing its industry in a more sustainable way by focusing on quality, innovation, safety and services.”

This should include the necessary training programmes for employees working with hazardous chemicals, along with stricter control on workforce qualification and certification processes.

Tianjin explosion: affect to chemical supply chain will be minor

IHS Chemical says that the impact of the explosions on the chemicals supply chain in the country is expected to be minor. Though there has been no official confirmation of the type of chemicals that was being stored in the warehouse, according to IHS Chemical, the explosion has destroyed 25,000-30,000 tonnes of linear low-density polyethylene that was being stored in the affected area. The destroyed stock is equivalent to almost 50% of monthly polyethylene imports through the port of Tianjin, IHS Chemical says.

“As the explosions occurred in a container warehouse, there were no bulk chemicals/plastics involved in the explosion,” said Paul Pang, Vice President, Managing Director/China, IHS Chemical. If bulk chemicals/plastics were damaged as a result of the incident, it was not significant enough to impact supply, he added. “Bulk chemical tank firms are not in the same district, and therefore there is no direct impact [on the supply chain]. Only several chemical iso-tanks were damaged.”

Loading/unloading of chemicals at the Tianjin port is currently suspended and transportation of chemicals by land has also been suspended, IHS Chemical says. “As a result, there is an interruption in the supply of chemicals/plastics in North China. However, this interruption is not likely to last more than two weeks. Tianjin is not a major chemical port, and the impact on the entire chemicals supply chain in China should be minor,” Pang says.

Tianjin devastated by explosions; TDI one of the chemicals suspected

The port city of Tianjin, north of the capital city of Beijing, in China, has been left devastated after terrifying explosions ripped through warehouses said to store hazardous chemical materials on Wednesday.

Environmental group Greenpeace says that according to the Tianjin Tanggu Environmental Monitoring Station, hazardous chemicals stored at the warehouses include sodium cyanide (NaCN), toluene diisocyanate (TDI) and calcium carbide (CaC2), all of which pose direct threats to human health on contact. “Sodium cyanide is highly toxic whilst toluene diisocyanate and calcium carbide react violently with water,” it said.

Toluene diisocyanate (TDI) is primarily used as a chemical intermediate in the production of polyurethane (PU) products. Tianjin has been growing as an automotive manufacturing hub and PU products are especially in use in vehicles. The port also serves as a major automotive trans-shipment point and about 10,000 imported cars were destroyed on Wednesday, according to the Qilu Evening News, with 2,748 from German manufacturer Volkswagen and more than 1,000 built by France’s Renault.

Meanwhile, Europe’s Airbus Europe’s Airbus has an assembly line for its popular A320 aircraft in the area but said that the blast was far from the facility and caused no immediate damage to its facility.

Among the 50 confirmed dead are 17 fire fighters, with more than 700 people treated in hospitals, 71 in critical condition, according to the state-run Xinhua news agency. Dozens of people are still reported to be missing, in the northern Chinese port city of more than 13 million people.

The explosions originated at a warehouse site owned by Tianjin Dongjiang Port Rui Hai International Logistics Co., a company that stores and transports dangerous chemicals. The blasts were so huge that they were visible from space, as shown in satellite images taken by the Japan Meteorological Agency, according to news reports. The blasts’ destructive force smashed buildings and mangled shipping containers. The first explosion was huge, and the second was even more powerful: the equivalent of 20 tonnes of TNT or a magnitude-2.9 earthquake, according to the China Earthquake Networks Centre.

As authorities deal with the aftermath, more questions arise on the safety issues pertaining to chemical storage. Questions have also arisen as to the positioning of the warehouse close to residential districts. A Chinese law requires a buffer around a chemical production plant at least 650 ft. It is unclear whether the Tianjin port was in violation of any rules.

Meanwhile, if it rains, it also raises the risk of chemicals being washed into local water supplies and eco-systems – with unknown impact, says Greenpeace, adding that the full extent to which the chemicals may have been burned off in the explosion is also unknown.

The latest explosion is by far the most dramatic – in a series of seven chemical plant blasts so far this year including explosions in the provinces of Jiangsu, Fujian and Shandong. The plant in Zhangzhou, Fujian province, southern China, produced paraxylene (PX). http://www.plasticsandrubberasia.com/apr2015/company3.html