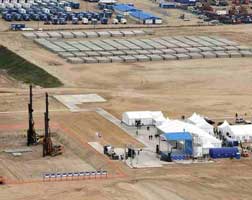 The US congress is introducing a bill that would impose strict measures against the oil and gas sector of Russia.

The sanctions were reportedly based on the allegations that Kremlin interfered in the US elections and tried to influence countries like Ukraine.

The bill also has a provision that bans the financing of any global energy projects initiated or supported by the Russian government or any of its state-owned companies.

According to reports, Alexander Kornilov, Aton energy analyst commented that the said provision could delay the Gazprom’s Nord Stream 2 and Turkstream, Russia’s projects to export gas from Russia to Europe.

The state-owned firm, Gazprom is funding the US$10. 7 billion Nord Stream 2 with five other regional firms and the US$1.15 billion Turkstream with a Turkish partner.

The pending bill will prohibit investors to provide technology, equipment and financial capital to the two pipeline ventures and other future projects.

But oil and gas director of Fitch Ratings, Dmitry Marinchenko is reportedly convinced that large companies in Russia will not be affected by this potential sanctions.

Gazprom runs a plant on Sakhalin Island and Novatek PJSC, an independent oil producer, runs a new plant on the Yamal Peninsula. Thus, some experts opined that the sanctions will unlikely make a tremendous impact to curb down Russia’s goal to reach a 20% global share in the LNG market by 2035.

On the other hand, the measure to ban technology and equipment supply movement may be futile since Russians still rely on Soviet projects for its oil output.However, Marinchenko implied that Russia may still feel the pinch of the restrictions on their production.