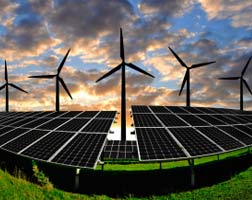 The advanced energy sector has made it to the big leagues.

At nearly US$1.3 trillion in global revenue for 2014, the market for innovative energy products and services is now as large as the market for apparel and fashion, and almost four times the size of the semiconductor industry worldwide, according to a new report commissioned by the group Advanced Energy Economy (AEE).

Last year was the biggest year for growth in advanced energy worldwide since AEE began tracking these markets in 2011 in collaboration with Navigant Research. Global revenue increased 12 % compared to 2013.

In the United States, the advanced energy market revenue grew 14 % last year — five times the rate of the U.S. economy overall — to just shy of US$200 billion, making it bigger than the U.S. airline industry ($180 billion), equal to pharmaceuticals (US$200 billion) and nearly the same size as consumer electronics (US$211.3 billion).

Advanced energy spans seven broad industry segments, including technologies such as solar, energy storage, demand response and natural gas turbines. Building efficiency is currently the largest segment of the U.S. advanced energy market, with revenue of US$60.1 billion in 2014. According to AEE data, revenue in building efficiency has grown 43 % over the last four years.

Results in transportation were mixed, with a slight year-over-year revenue decline. U.S. revenue for hybrid vehicles fell by 19 % in 2014, but went up by 34 % for plug-in electric vehicles. Revenue from electric-vehicle charging stations jumped up 31 % to $201.5 million, a sevenfold increase from 2011. Revenue from natural-gas-powered vehicles went up 26 %.

In electricity generation, solar energy and natural gas generating equipment both increased substantially, up 39 % to US$22.5 billion and 48 % to US$6.4 billion, respectively. According to AEE, the uptick in turbine sales indicates that the “natural gas revolution” is now translating into new orders, and not just boosting productivity at existing natural gas power plants.

In 2013, wind energy saw a severe downturn in response to uncertainty over the federal Production Tax Credit. Revenue fell to US$2.1 billion in 2013 from US$25.5 billion in 2012, which was enough of a blow for all segments of U.S. advanced energy to show an overall decline of 4 % on a year-over-year basis. But wind bounced back in 2014, reaching US$8.2 billion. Based on the number of projects currently in the pipeline, 2015 could be a record year.

“We know that’s possible, but it’s very dependent on policy,” said Reilly, speaking at an AEE event this week in Washington, D.C.

Policy will be a key driver of continued growth across the advanced energy sector, said Graham Richard, CEO of AEE. In particular, where federal tax provisions for advanced energy have been allowed to lapse, they need to be extended.

“Making energy tax policy stable, predictable and technology-neutral so our industry can invest in growth for the long run is very important,” he said.

“In some states, renewable energy and energy-efficiency policies are under attack,” he added. “In those states, we see an opportunity to do more discussion in the area of energy efficiency and peak demand management.”

Regulations also need to change. Many utilities in the U.S. and around the world are paid for building new assets and selling electricity. As some parts of the advanced energy market continue to grow, they will diminish utility revenue by reducing the need for new capacity and energy sales.

But at the same time, utilities are vital to the coming transformation in the power sector, according to leaders in advanced energy.

“We need to reform all over the world that regulatory paradox, so that utilities…are not hurt financially by all of this innovation,” said David Brewster, president and co-founder of EnerNOC. “It’s in [society’s best] interest: we want to reduce carbon, we want to reduce energy, and we need to make sure utilities have a stake in that and are incentivized to do that.”

Over the last 135 years, “utilities have developed a range of expertise, not just in owning and operating wires,” said Richard Caperton, director of national policy and partnerships at Opower. “But they have also developed strong customer relationships, they have strong customer-facing brands and they understand their customers better than many of the AEE companies could ever understand their customers.”

“I think we need utilities to be a delivery vehicle for a range of solutions,” he said.

Advanced energy products included in the AEE report “can benefit the grid by really, tangibly reducing the costs of operating and maintaining the grid itself, while also improving not just sustainability, but also the reliability and resilience of the grid,” he said.

“While we have a lot of rhetoric of opposition [around technology innovation], underlying this, I see a different attitude than I saw three years ago,” said AEE’s Richard. “There’s a desire to get it right and make it work.”