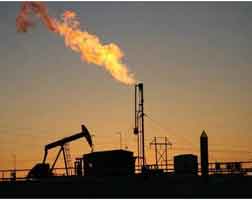 As part of the US government’s strategy under President Barack Obama to address climate change, a new rule has been issued by the US Department of the Interior that seeks to reduce waste and methane emissions on of oil and gas operations on public and tribal Indian lands.

Energy companies frequently “flare” or burn off vast supplies of natural gas at drilling sites because it makes less money than oil. A government report said an estimated 40% of the gas being flared or vented could be captured economically and sold.

The Methane and Waste Prevention Rule, developed by Interior’s Bureau of Land Management (BLM) and set to take effect by mid-January 2017, updates 30-year old regulations to meet modern standards. It also ensures that natural gas is not wasted by being burned off into the atmosphere but rather used to power the economy.

“This rule to prevent waste of our nation’s natural gas supplies is good government, plain and simple,” said Interior Secretary Sally Jewell. “We are proving that we can cut harmful methane emissions that contribute to climate change, while putting in place standards that make good economic sense for the nation.”

The US is the largest natural gas producer in the world, yet the American public has not benefited from the full potential of this energy. Between 2009 and 2015, enough natural gas was lost due to venting, flaring, and leaks to serve more than 6 million homes for a year.

Under the new rule, energy companies that drill on 245 million acres of public land, mostly in the West, will be required to capture natural gas that can be used to generate power for millions of homes and businesses. They will also be required to periodically inspect their operations for leaks and replace outdated equipment that vents large quantities of gas into the air.

The new rule also should generate tens of millions of dollars a year that can be returned to federal taxpayers, tribes and states while reducing pollution, Jewell said.

In addition, most of the gas being burned at drilling sites is methane, a powerful greenhouse gas that is about 25 times more potent at trapping heat than carbon dioxide, although it does not stay in the air as long. Methane emissions make up about 9% of US greenhouse gas emissions, according to government estimates.

“America’s natural gas helps power our economy – it’s a resource, not a waste product, and it’s time we start treating it that way,” said BLM Director Neil Kornze. “With better planning and today’s affordable technology, we can cut waste in half. This common-sense rule will save enough gas to supply every household in the cities of Dallas and Salt Lake City combined – every year.”

The US Department of the Interior is the federal executive department of the US government responsible for the management and conservation of most federal land and natural resources, and the administration of programs relating to Native American, Alaska Natives, Native Hawaiians, territorial affairs, and insular areas of the US.