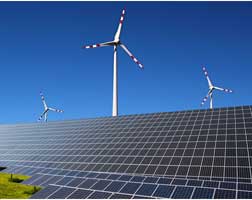 The US used more electricity sourced from renewables than nuclear power in March and April, marking the first time renewable energy has outpaced nuclear since 1984, according to the US Energy Information Administration (EIA).

The growth in renewables was fueled by scores of new wind turbines and solar farms, as well as recent increases in hydroelectric power as a result of heavy snow and rain in Western states last winter. More than 60% of all utility-scale electricity generating capacity that came online last year was from wind and solar.

In contrast, the pace of construction of new nuclear reactors has slowed in recent decades amid soaring costs and growing public opposition. Nearly all nuclear plants now in use began operation between 1970 and 1990, with utilities starting to retire some of their older reactors.

Still, experts predict output from the nation’s nuclear plants will still outpace renewables for the full year, due to such seasonal variation as less water flowing through dams in the drier summer months. Also, nuclear plants tend to undergo maintenance during spring and fall months, when overall electricity demand is lower than in summer or winter.

Although the use of renewable energy sources in the US has grown, the country still gets two-thirds of its electricity from burning fossil fuels, primarily natural gas and coal. Nuclear and renewables account for roughly equal shares of the rest, each accounting for less than 20% of total output.