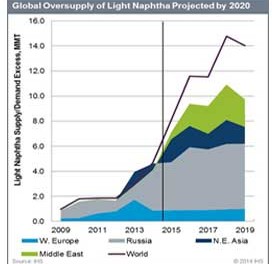 Global production of light naphtha, an essential steam-cracker feedstock for the production of gasoline and numerous chemicals, is increasing and could create a global surplus that exceeds market demand by as much as 14 million tonnes by 2020. This capacity expansion and surplus of light naphtha is occurring in large part due to the rapid expansion of tight oil and shale gas production in North America, and in particular, the US, which will surpass the Middle East to become the world’s largest exporter of light naphtha by 2020, according to a market review from research house IHS.

The IHS Energy and IHS Chemical Light and Heavy Naphtha International Market Review is a long-term study that provides separate light and heavy naphtha supply and demand balances, international trade data and pricing, as well as a 15-year global forecast for 2014 to 2029. According to the review, global production of light naphtha was 367 million tonnes in 2014, and consumption was 363 million tonnes in 2014. Global consumption of light naphtha is expected to continue to increase at an annual rate of about 2% during the next ten years, the report says, while the increase in production is expected to slowdown from just under 2.5% in the next five years, to close to 1.5% during the following five years as the market readjusts to bring production closer in line with demand.

While current production continues to increase, the growth rate of light naphtha consumption is constrained somewhat by the penetration of ethane, propane and butane (EPB) gases in the steam-cracker feedstock slate. All seven new ethylene plants currently under construction in North America have been designed to utilise ethane feed. Additionally, the availability and low prices of EPB feed has already minimised the use of naphtha as steam-cracker feedstock in North America.

“The rapid expansion of shale energy production, particularly in North America, has contributed to global oversupply of light naphtha, which is derived from crude oil,” said Nick Rados, director, chemical feedstocks and energy at IHS, and co-author of the report. “On one hand, we have a global excess in terms of oil production, and secondly, we have EPB (from natural gas liquids NGLs) displacing some of the naphtha demand away from steam-cracker feeds, which will further add to oversupply of naphtha during the next five years.”

Most light naphtha trade originates from the Middle East, Russia and North Africa and is sent to East Asia, primarily for use as steam cracker feedstock. With the onslaught of US production, though, this trade balance is shifting. Light naphtha demand will increase driven primarily by steam cracker feedstock demand everywhere except in North America, IHS said. Most of the present steam cracking demand is in Northeast Asia and Europe. However, going forward, most of the demand growth will be in Southeast Asia, India and the Middle East.

Said Rados, “It is unlikely that the North American market can use all of the light naphtha to be produced in the US, so by 2020, IHS expects the US to emerge as the largest exporting country in the world for light naphtha, with almost half of these exports being imported by Canada. The increase in US production will be imported by other regions and used to meet ‘price-sensitive’ demand for steam-cracker feedstock, heavy crude diluent, gasoline production and blending into other products.”

The US is not alone, however, in needing to secure a market for its increasing exports of light naphtha. “Like the US,” said Tom Manning, senior director, natural gas liquids at IHS, and co-author of the report, “the growing surplus of light naphtha in Russia must find a market, so either Russia’s exports will increase—if there is market demand—or its production rates will be reduced in conjunction with a decrease in European production. Additionally, the Middle East has added an appreciable amount of new naphtha refining capacity, and utilization of these assets may be lower until market demand absorbs new naphtha refining capacity.”

Additionally, 77 million tonnes of lower-quality heavy naphtha is separated with light naphtha or is blended into full-range paraffinic-grade naphtha. Condensate splitting has never been a very large segment of the business, but increased availability of segregated condensate is encouraging U.S. refining as well as North and Southeast Asia petrochemical companies, to build condensate splitters.