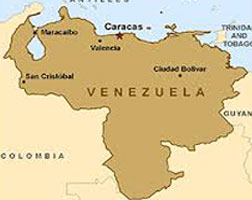 Venezuela says it will cut the working day for public sector workers to five-and-a-half hours to conserve energy, down from eight to nine hours.

The initiative is part of a nationwide electricity rationing plan.

Vice-President Jorge Arreaza said there had been a surge in energy demand due to extremely hot weather. He said state employees would now work from 07:30-13:00 to save on air conditioning.

On Monday, local media reported blackouts across the country.

Mr Arreaza said private companies would be asked to use their own generators to reduce pressure on the national grid.

But he said it was private homeowners who consumed the most energy, and he called for everyone to turn the dial down on their air conditioners.

“We are appealing to everyone’s conscience, to use energy efficiently.”

Last week the government claimed that energy problems were due to maintenance issues, but the opposition criticised the government for not investing enough in the energy sector, BBC Venezuela correspondent Daniel Pardo reports.

Power outages are common in Venezuela, which is a big oil producer but depends heavily on hydro-electric power.

Venezuela is also struggling with an economy in recession that has been hard hit by the fall in the price of oil. Some 96% of its export revenues are reported to come from oil.