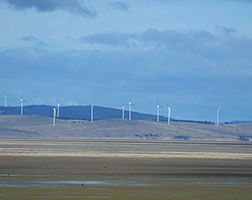 The Victorian premier has reaffirmed a pledge to build Australia’s third-largest wind farm of its type, and took aim at Tony Abbott’s stance on renewable energy.

Daniel Andrews visited the wind farm in Ararat on Wednesday where he said more than 70 new turbines would be built.

Andrews added Victoria had not been deterred from setting its own renewable energy target.

He said it was still possible to legislate a state-based target, despite a lack of federal support, with his government working on measures to boost Victoria’s renewables industry and clean energy demand.

“We’re doing a power of work to look at ways in which we can encourage more clean energy in our state, and the jobs that come with it,” Andrews said on Wednesday.

“Everything ranging from the way the government purchases energy, who it purchases from, investment opportunities, grants that we might make, partnerships we might form,” he said.

Renewables account for about 12% of Victorian energy generation and Andrews wants a “much higher number”.

The Australian Capital Territory government said on Wednesday wind farm projects would have another chance to bid to supply Canberra.

It said a second reverse wind auction, enabling projects to secure supply contracts, would be held before the end of the year.

It follows a similar auction earlier this year which approved three wind farms – two in Victoria and one in South Australia – to supply about a third of Canberra’s energy needs.

Successful bidders are guaranteed a feed-in tariff for electricity over 20 years.

The ACT’s environment minister, Simon Corbell, told a clean energy summit states and territories could not rely on the federal government for ambitious renewable policies.

He said 65% of ACT’s energy would come from renewables in less than two years and the territory was aiming for 90% by 2020.

Corbell called on other state and territory governments to push their own renewable policies, saying more had to be done if Australia was going to play a role in meeting the international target of limiting global warming to two degrees.

“States and territories can and must play … a critical role,” he told the summit in Sydney on Wednesday.

He also called on the ALP to adopt a policy of 50% carbon emission reductions by 2030 and a 50% renewable energy target in the same year.

The party will debate its climate platform at its conference next month.

Victoria’s Ararat project, backed by a global consortium including Renewable Energy Systems, GE, Downer, Partners Group and OPTrust, will employ up to 285 workers and inject more than $7m into the local economy over the next two years.

The farm is expected to have a life span of 25 years and will generate enough electricity to power about 123,000 households across the state. – The Guardian