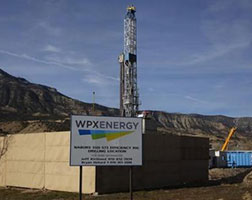 The acquisition will give WPX about 92,000 acres in Permian’s Delaware Basin – spread across Texas and New Mexico – at about US$12,500 per undeveloped acre.

Acreage in the basin – the biggest and fastest-growing U.S. shale oil field – was worth as much as US$30,000-US$35,000 per acre at US$100 oil, said Imperial Capital analyst Bob Christensen.

WPX shares rose as much as 7 % to US$11.88 in morning trading on the New York Stock Exchange on Tuesday.

“The Delaware basin is a premier basin for operators and for WPX to enter in this manner (with billions of dollars looking for deals) is a huge win,” Simmons & Co analysts said.

A near-50 % drop in crude prices since highs of over US$100 per barrel in June last year has led to several big-ticket acquisitions, including Royal Dutch Shell’s (RDSa.L) US$70 billion offer for BG Group (BG.L).

WPX’s Permian deal is the largest shale acquisition since Noble Energy Inc (NBL.N) announced its US$2 billion deal for Rosetta Resources Inc (ROSE.O) in May.

WPX, which was spun off from Williams Companies Inc (WMB.N) in 2011, said it planned to increase the number of rigs in the Permian to six at the end of the year from four.

With crude prices steadying at about the US$50 mark, several oil producers including EOG Resources Inc (EOG.N), Concho Resources Inc (CXO.N) and Devon Energy Corp (DVN.N) are putting rigs back to work.

WPX, which is reducing its reliance on less lucrative natural gas, said the deal would increase its exposure to oil.

The company now expects oil to account for nearly a third of its output in 2016, compared with about 20 % currently.

The assets being acquired produce about 22,000 barrels of oil equivalent per day, the company said.

WPX, which will also assume US$400 million in debt, said it would fund the acquisition with a US$1.5 billion stock-and-debt offering.

The deal excludes RKI’s Powder River basin assets in Eastern Wyoming, which the company plans to divest or sell before deal close, expected in the third quarter.