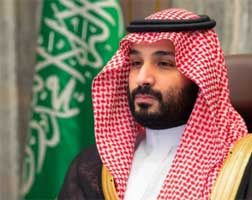 State-owned oil firm Saudi Aramco and its subsidiary, petrochemical firm Sabic, will spearhead investments of 5 trillion riyals (US$1.3 trillion) by the local private sector by 2030 under a programme to diversify the country’s economy away from oil, Saudi Arabia’s Crown Prince Mohammed bin Salman, said recently, according to a Reuters report.

The move aims to mobilise the Gulf Arab state’s private sector to help wean the economy off its reliance on oil exports, which still account for more than half the state’s income, and develop new sectors to help create jobs for millions of Saudis.

“Building a vibrant and prosperous private sector is one of the national priorities for the Kingdom and that is why we are today inaugurating a new and more powerful era in terms of cooperation and partnership between the government and private sector.,” Mohammed said.

The total amount would rise to 27 trillion riyals with government spending and domestic consumption.

He later told journalists in a virtual briefing that Aramco and Saudi Basic Industries Corp (Sabic) would represent 60% of the 5 trillion riyal investment.

Prince Mohammed said the government has asked the biggest participating firms to lower their dividends in order to raise capital spending.