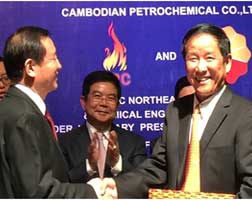 A groundbreaking ceremony was held on the site of Cambodia’s first oil refinery, a US$620 million project aimed at reducing spending on imported fuel.

The refinery, being built by an engineering unit of China National Petroleum Co. (CNPC), will be able to process 2 million tons of crude oil a year when it is completed in 2019, according to Cambodia’s Minister of Mines and Energy Suy Sem. A second phase unit that is set for completion in 2022 will increase capacity to 5 million tons.

SuySem said most of the crude oil for the refinery would come from the Middle East.