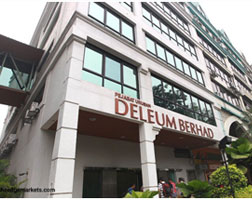 Deleum Berhad, provider of a diverse range of supporting specialised products and services to the oil and gas industry, recorded a higher pre-tax profit of RM33.9 million for the nine months ended 30 September 2017, up 5.9% from the corresponding period in 2016.

The Group’s revenue, however, contracted 11% to RM364.2 million compared with the corresponding period of RM407.4 million underscoring the difficult trading conditions in the first half of the financial year. The improved pre-tax profit was attributable to the favourable sales mix recorded in the third quarter of the year.

The Power and Machinery (P&M) segment recorded a higher pre-tax profit of RM23.8 million for the period under review compared to RM22.9 million in the corresponding period as a result of better sales mix and improved margins.

The Oilfield Services (OS) segment logged a marginal 0.1% higher results of RM10.6 million for the nine months ended 30 September 2017 mainly due to improved margins from slickline activities in East Malaysia alongside lower finance costs on borrowings for the oilfield assets.

The Integrated Corrosion Solution (ICS) segment saw a RM2.0 million jump in its pre-tax profit turning in RM2.7 million in the current period compared to the corresponding period. This was attributed to improved margins on work orders on the back of operational efficiencies and lower costs to serve.

In the year-to-date, despite lower cumulative revenue recorded, profit for the financial year-to-date increased to RM23.4 million from RM20.5 million on the back of operational efficiencies and cost management.

However, the volatility of the Ringgit continues to have a marked effect on reported earnings as certain of the Group’s financial assets and liabilities are denominated in US Dollars.

Looking to the remaining quarter for the year, Deleum expects trading conditions experienced in the third quarter to flow into the current quarter. However, the Group cautioned that downside risks remain as there are external factors and unpredictable events affecting oil prices and the activity levels of its key customers.

Looking ahead, Deleum Group will continue to concentrate on its core businesses, operating efficiencies and managing cash flows.