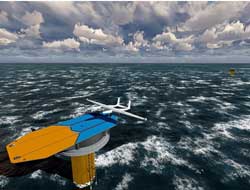 E.ON, the world’s largest investor-owned power and gas company, has announced its plans to invest in the development, construction, and operation of a demonstration site in County Mayo in Ireland to test airborne kite-based wind energy technology designed to capture wind energy at high altitudes.

In line with this, the company has entered into a collaboration agreement with Ampyx Power as the first user of the upcoming test site.

“Airborne wind supports one of our overall targets to drive down cost for renewable energy. In addition to making airborne wind competitive to conventional wind power, we would like to work with authorities and legislators to pave the way for introducing this exciting technology and eventually make it eligible to participate in tendering processes,” said Anja-Isabel Dotzenrath, CEO of E.ON Climate & Renewables.

The Netherlands-based Ampyx Power, founded in 2009, is one of the leading companies in the emerging airborne wind energy sector.

Wolbert Allaart, its Managing Director, explained: “This cooperation with E.ON, one of the leading energy companies in the world, is a major milestone for our company. It is fundamental for us as it allows us to incorporate E.ON’s vast offshore wind expertise into our product design efforts. The clear proof of market interest inspires our team of almost 50 engineers who are working on product development since 2014, after we have proven our concept in the initial five years of our existence.”

Airborne wind technology harvests wind energy by using a fixed wing or sail comparable to kite-surfing in altitudes up to 450 meters. This novel technology has the potential to transform the global offshore wind generation market as airborne wind devices are cheaper to manufacture and easier to maintain than conventional wind turbines.

Additionally, they are easier deployed in deeper waters surrounding countries such as Portugal, Japan and the US, but airborne wind energy can also be deployed onshore.