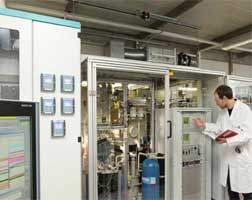 German chemical firm Evonik and Siemens Energy have commissioned a pilot plant sponsored by the German Federal Ministry of Education and Research (BMBF) that uses carbon dioxide and water to produce chemicals. The necessary energy is supplied by electricity from renewable sources. The pilot plant is located in Marl, in the northern Ruhr area, and its innovative technology of artificial photosynthesis should contribute to the success of the energy revolution. It is an essential part of the Rheticus I and II research projects, which are sponsored by the Federal Ministry of Education and Research (BMBF) with a total of EUR6.3 million.

The pilot plant has started up in Marl, the largest Evonik site. It consists of a CO electrolyzer, developed by Siemens Energy, a water electrolyzer and the bioreactor with Evonik’s know-how. In the electrolyzers, carbon dioxide and water are converted into carbon monoxide (CO) and hydrogen (H2) with electricity in a first step. This synthesis gas is used by special microorganisms to produce specialty chemicals, initially for research purposes. These are starting materials for special plastics or food supplements, for example.

In the coming weeks, the composition of the synthesis gas and the interaction between electrolysis and fermentation will be optimised. In addition, a unit for processing the liquid from the bioreactor will be set up to obtain the pure chemicals. After successful completion of the current Rheticus project phase (Rheticus II), Evonik and Siemens Energy will have a unique platform technology at their disposal that can produce energyrich and valuable substances such as specialty chemicals or artificial fuels from CO2 – in a modular and flexible manner.