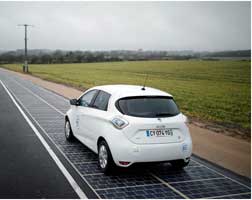 The world’s first solar panel road has officially debuted in a small village in Normandy, France and was inaugurated by French Ecology Minister Ségolène Royal.

Officials believe that the 1 km stretch of road in the small village of Tourouvre-au-Perche that is covered in 2,800 sq m of photovoltaic panels could harvest enough power to turn on all of the town’s street lights.

The road, called the “Wattway”, is designed to be used by up to 2,000 motorists per day, while providing an average of 767 kilowatt-hours (kWh) per day, enough energy to power all of the street lighting in the 3,400-resident village.

The solar panels have been coated in a resin containing five layers of silicon to protect it from wear and damage from the passing vehicles. The panels were also tested in four carparks across France before its opening on the RD5 road.

However, since the panels are flat and not curved like the more common roof-mounted panels, they take in less energy and are also a bit more costly. The construction of the Wattway cost EUR5 million (about US$5.2 million), but solar panel producer Colas says it intends to bring the price down in the near future.

The road’s construction is part of a push by French ecology officials to install 1,000 km of solar roads throughout the country within the next five years.

Directors view the project not as a finished product but as the next step in the development of the technology.Colas reportedly has around 100 other solar-panel road projects lined up—half of which are in France and the rest in other parts of the world.

“We are still on an experimental phase. Building a trial site of this scale is a real opportunity for our innovation,” said Wattway Director Jean-Charles Broizat in a statement. “This trial site has enabled us to improve our photovoltaic panel installing process as well as their manufacturing, in order to keep on optimizing our innovation.”

The road will now begin a two-year testing period, in which the feasibility of adapting the technology will be measured.