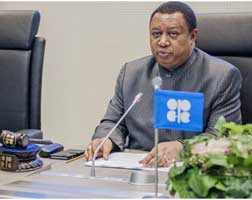 The Joint OPEC-Non-OPEC Ministerial Monitoring Committee (JMMC), set up to monitor the global deal on oil output curbs, will not be discussing the possibility of further production cuts at its regular meeting on July 24in the Russian city of St. Petersburg, according to OPEC’s secretary-general.

Mohammad Barkindo, speaking to journalists in Istanbul before the World Petroleum Congress, said such discussions would be premature, according to a report by a Russian news agency.

The Organization of the Petroleum Exporting Countries (OPEC) and its allies, such as Russia, agreed to cut output by about 1.8 million barrels per day (bpd) from January 2017 until the end of March 2018 to reduce bloated inventories and prop up prices.

But oil prices LCOc1 have fallen since May, as oil production from the United States and other producers not bound by the pact has risen. Oil output from two OPEC members, Nigeria and Libya, both exempt from the limits, has also climbed.

Energy ministers from Saudi Arabia, Russia and several other key producers have previously said there was no need for immediate extra measures to support oil prices.

But Russia’s Energy Ministry said on Friday that Moscow was ready to consider proposals, including revising the deal, if needed.

Russian Energy Minister Alexander Novak said last week that the monitoring committee, which will discuss the deal implementation and market situation, had the authority to recommend “any decisions” to participants.