Nations across Southeast Asia are seeking to understand the viability of utilizing hydrogen in their pursuit of carbon neutrality.

The Philippines has signed a Memorandum of Understanding (MoU) with Tokyo-based Hydrogen Technology Inc. (HTI) to explore the use of clean-burning hydrogen as a fuel for power generation. The first MoU the country signed for a similar undertaking was with Australian research and development company Star Scientific Ltd.

Singapore has announced a S$49 million (US$36 million) Low-Carbon Energy Research Funding Initiative to support research and test-bedding efforts in low carbon energy technologies, such as hydrogen. A hydrogen-powered ‘tri-generation plant’ providing heat, power and cooling for a data center is also being explored by Keppel Data Centres and Mitsubishi Heavy Industries.

Vietnam has flagged hydrogen use for electricity generation at independent power stations. German-based technology and engineering group GICON® and the Vietnam Petroleum Institute (VPI) have signed a MoU to collaborate on renewable energy and hydrogen production in Vietnam.

According to Black & Veatch’s Strategic Directions: Electric Industry Asia 2021 report, more than 60 percent of the region’s electric industry leaders believe hydrogen will probably or definitely take off as a clean and affordable alternative to existing gas generation. Even at this nascent stage of development of the hydrogen economy, almost one in four or 24.1 percent are optimistic of hydrogen’s future role. (Figure 1) 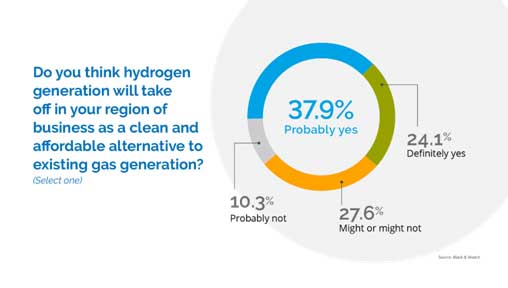 In its report, Net Zero by 2050: A Roadmap for the Global Energy Sector, the International Energy Agency (IEA) has identified hydrogen electrolysers as one innovation it believes will help to reduce carbon emissions between 2030 and 2050.

The IEA had previously noted that hydrogen is experiencing unprecedented momentum around the world due to its potential to tackle various critical energy challenges, offering a way to decarbonize a range of sectors and result in meaningful emission reductions.

While the development of fuel-cell vehicles continues to show promise in the decarbonization of medium and heavy duty transportation, the electric power industry in Asia today has an opportunity to begin planning, studying and adjusting ahead of hydrogen’s introduction as a fuel source and vital component of the region’s energy transition.

One near-term opportunity for the industry is to blend hydrogen as a component of the fuel mix in gas-powered turbines. Such an approach could be applied to much of Asia’s gas-fired facilities, where approximately one-third of the more than 90 gigawatts are less than ten years old: combining recent turbine technology and expectations of prolonged operating lifespans.

In the United States, Black & Veatch is working with several clients to investigate hydrogen’s feasibility at existing gas plants as well as actively supporting the development of hydrogen-capable generation.

The IPA project will be commercially guaranteed of supporting a blend of 30 percent green hydrogen by volume at its commercial operations date, with plans to transition to 100 percent hydrogen by 2045. Long Ridge will begin operations with a five percent hydrogen blend by volume in 2021 with plans to scale to full hydrogen fuel within a decade. This makes IPA and Long Ridge among the earliest large-scale users of combustion turbine technology designed to use a high percentage of green hydrogen.

By evaluating and future-proofing gas-fired generation facilities, there is potential for power providers in Asia to take advantage of near-term incentives that may emerge, contributing to significant reduction in carbon emissions as investments in coal assets decline and are eventually retired.

Another opportunity for Asia’s power providers is to realize and plan for hydrogen’s role in future grid stabilization and management.

Lessons from California’s blackout in 2020 – a U.S. state with significant renewable generation and a good example of what future grids may look like – point to the importance of storage and alternative low-carbon baseload electricity for resilient grid operations. What was missing during this blackout was adequate, flexible supplies of electricity that could be brought online quickly to meet quick surges in demand. Similar system stability concerns have also emerged after the rolling blackouts in Texas in February 2021.

It is believed that hydrogen-based systems could emerge as a complementary solution to renewables and some natural gas-fired assets. Different reliability pricing services could be developed for industrial customers such as always-on data center providers, or semiconductor or pharmaceutical manufacturers where downtime can have serious impacts on business operations. Such sectors are not only seeking to expand across Asia but are also committed to zero-carbon emissions for their business and supply chains.

The Hydrogen Council forecasts that hydrogen could meet 18 percent of the world’s energy demand by 2050. As a clean-burning, emissions-free gas, hydrogen offers a clear pathway to cost-competitive decarbonization where reliability, resilience and performance cannot be compromised.

For hydrogen to contribute to Southeast Asia’s decarbonization efforts, it will have to be adopted on a large-scale. Lowering its production cost will be critical to spur wide-scale hydrogen adoption. Taking advantage of engineering, procurement and construction expertise is one approach that can help to overcome cost hurdles like the lack of infrastructure and technology around transportation and storage.

To meet its net zero emissions target, Asia’s electric power industry will need to start planning for capital investments from now to 2030. Professional assessments and studies on how to future-proof gas-fired facilities with clean fuels, like hydrogen, and energy storage technologies, such as battery energy storage systems, will be a good starting point.