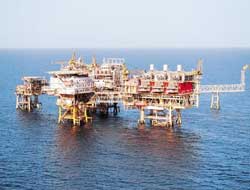 The Ministry of Petroleum and Natural Gas in India and state-run oil and gas companies have already started discussions about the consolidation of the firms to create a globally competitive “oil major”. Ministry officials met the heads ofall public sector oil companies and asked them to suggest possible merger scenarios, according to a source familiar with the development.

Finance minister ArunJaitley had announced in his Budget speech on February 1 that the government plans to merge state-run oil and gas entities to create an integrated firm having the strength to compete with international and domestic private oil and gas majors. He emphasized that the move will provide the resulting merged entity the “capacity to bear higher risks, avail economies of scale, take higher investment decisions and create more value for the stakeholders”.

The move will require the petroleum ministry to do a lot of ground work and think of ways to initiate the proposed consolidation, before the department of investment and public asset management steps in to execute the plan.

The idea has been received with mixed reactions by the industry. Though some have welcomed it, ONGC chairman Dinesh Sarraf said in an interview earlier this month that the oil explorer’s overseas arm, ONGC Videsh, should not be merged as such horizontal integration would create monopoly.

A GAIL (India) executive had said their business model is distinct from others and it may remain a separate vertical even in case of a merger.

However, unlike as was believed after Jaitley’s announcement that one oil giant will be created, oil minister Dharmendra Pradhan had clarified that it will not be a merger of all companies, that more than one large company could be created or smaller firms may be merged into larger Navratna companies.

Talking about the merger scenarios, a government official not wanting to be named said there are various options to consolidate the public sector oil companies. “These include creating a holding company, or creating two companies by merging the upstream ones together and downstream ones separately.” The official reiterated what Pradhan said and added that the third option could be merger of smaller companies with larger ones.

According to a recent Fitch Ratings report, though the move could reduce inefficiencies across the sector and create an entity that is better placed to compete globally for resources and less vulnerable to shifts in oil prices, a merger would face significant execution challenges.

The main hurdles, according to the report, will be faced in terms of managing the integration of employees, addressing overcapacity in the merged entity, and winning the backing for merger from private shareholders.