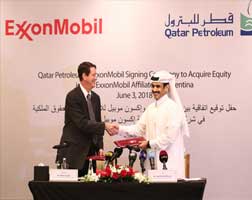 Doha-headquartered Qatar Petroleum (QP) says it has acquired a 30% stake in two of US oil/chemical firm ExxonMobil’s affiliates in Argentina, which hold different interests in hydrocarbon licenses for seven blocks in in the Vaca Muerta in the onshore Neuquén basin.

With this deal QP, the world’s biggest supplier of liquefied natural gas (LNG), will have a share in ExxonMobil Exploration Argentina S.R.L. and Mobil Argentina S.A..

“This is an important milestone, as it marks Qatar Petroleum’s first investment in Argentina as well as its first significant international investment in unconventional oil and gas resources,” QP’s Chief Executive Saad Al-Kaabi said.

Al-Kaabi added, “This agreement… goes hand in hand with the planned expansion of our local production from the North Field, which will further boost Qatar’s leading global position by raising its LNG production from 77 million to 100 million tonnes/year.”

The deal between QP and Exxon comes as the world’s largest publicly traded oil producer looks to rapidly expand its upstream operations under Chief Executive Darren Woods, who inherited a portfolio with relatively few international growth operations compared to peers.

By bringing in QP as a partner, Exxon cuts its financial risk and also pushes the project forward.

For QP, the deal offers a chance to invest for the first time in a sizeable shale operation while avoiding difficulties that would have likely arisen had it invested in shale operations in the US, where Qatar and other OPEC members are viewed as competitors against US shale gas producers.

With this deal, QP also has long-term access to gas assets abroad, to shore up its reserves when these start depleing.

For Qatar it also signals its ability to sign big multi-billion-dollar deals with oil majors despite a prolonged regional political crisis and pressure on governments and companies by other Gulf neighbours to reduce ties with Doha. Last year, Saudi Arabia, UAE and Bahrain, along with Egypt imposed a political and economic boycott on Qatar, accusing it of supporting terrorism, which Doha denies.

“Our oil and gas sector has not been impacted by the blockade, nor has our previously planned expansion,” Al-Kaabi emphasised.