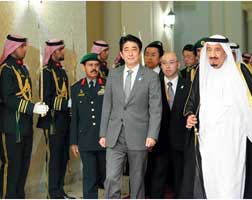 As part of the broader economic cooperation between Japan and the Kingdom of Saudi Arabia during King Salman’s current visit to Japan, Japanese petroleum company JX Nippon Oil & Energy will consider the construction of oil refinery and chemical facilities in Saudi Arabia.

JX Nippon Oil, a JX Holdings unit and Japan’s leading oil wholesaler, will sign a memorandum of understanding for a collaboration with state-owned Saudi Arabian Oil Company (Saudi Aramco). The framework involves other Japanese players such as fellow oil wholesaler Idemitsu Kosan and Sumitomo Chemical. Construction of a new refinery or chemical plant would involve investing hundreds of billions of yen (100 billion Yen equals US$871 million).

During the past two to three years, low crude prices have prompted Saudi Arabia to boost exports of oil derivatives like gasoline and diesel. The country now can process about 3 million barrels of crude oil daily, having increased refineries. Storage terminals for petroleum products are to be covered in the memorandum.

Saudi Arabia also is working to produce more chemicals from crude oil, as chemical prices are more stable than those for oil. Sumitomo Chemical has a joint venture with Saudi Aramco on an industrial complex of petroleum and chemical facilities in the Saudi town of Rabigh.

Riyadh aims to increase government revenue from sources outside crude oil by more than six times the current level to SR1 trillion (US$266 billion) in 2030. The country will continue its shift toward petroleum products and chemicals with greater added value.