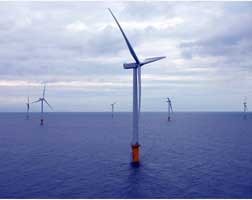 Japanese multinational automotive manufacturer Mitsubishi is looking to grow its presence in the European renewables market by acquiring power transmission cables for an offshore wind farm in the UK.

The company will pay £180 million for the transmission cables and sub-stations spanning 26 kilometers between the 258-megawatt (MW)Burbo Bank Extension wind farm and the county of Denbighshire in north Wales. It is set to operate the link for 20 years starting late this year.

More such acquisitions are planned in the UK, which is expected to have 23 gigawatts (GW) of offshore wind power in operation by 2030 (the European Union’s capacity is set to expand to 66 GW over the same period).

Since 2011, Mitsubishi has acquired roughly 900 kilometers of offshore power transmission cables at four sites in Germany and four in the UK.

The company is cultivating technology to ensure a stable flow of power to the grid, as well as gaining operational know-how, including how to maintain undersea equipment.

Offshore wind farms are expected to ‘take off’ in Europe, because costs are coming down and there is an abundance of shallow coastal waters.

Mitsubishi operates solar plants in Portugal and France, offshore wind farms in the Netherlands and Belgium, and onshore wind facilities in France.

The company aims to continue tapping into the growing demand for power generation and transmission in Europe, while using its accumulated experience to expand into other markets.